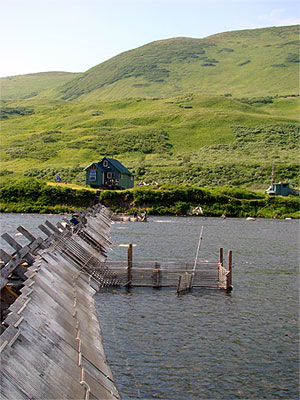 The Karluk River weir is approximately 101 m (330’) long and is located about 1.3 km (0.8 mi) upstream of the confluence of the Karluk River and Karluk Lagoon, on the southwest side of Kodiak Island. The weir was first constructed in 1921 at its current location and was operated annually at this location until 1941. The weir was moved to "the portage," approximately 12.9 km (8 mi) downriver from the Karluk Lake outlet from 1942 to 1945. Between 1946 and 1975 it was operated at the outlet of Karluk Lake. It was re-established at its present location in 1976. The weir is operated by two to four ADF&G Commercial Fisheries Division employees from mid-May to late September. In 2010, one ADF&G Sport Fish Division employee assisted with weir operations during the Chinook salmon run from mid-May until approximately July 15.