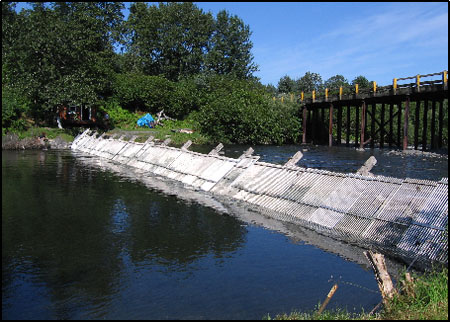 The Buskin River weir is approximately 38 m (125’) long and was first constructed in 1985 approximately 1.6 km (1 mi) above the outlet of the Buskin River, which flows into Chiniak Bay on the northeast side of Kodiak Island. In 1990, a 33 m (109') weir was constructed at the outlet of Buskin Lake, approximately 6.4 km (4 mi) above the lower weir site. This location was chosen to avoid the frequent washouts that occur at the lower site and to assure a consistent and accurate count of sockeye salmon from mid-May through late July. In past years, the weir is moved annually from the upper site to the lower site in late July or early August to obtain an accurate coho salmon count. In 2010, two SFD employees operated the upper weir from May 21 to October 7 and the lower weir from July 29 to September 29. Escapement counts for sockeye salmon and steelhead were measured at the upper weir while the Chinook, coho, pink, and chum salmon are measured at the lower weir. Because the Lake Louise weir is upstream of the lower Buskin weir site but the confluence of Lake Louise is below the Lake weir site, the escapement for the Buskin River drainage is considered to include the Buskin River weir cumulative counts plus the sockeye salmon cumulative counts through Lake Louise weir.