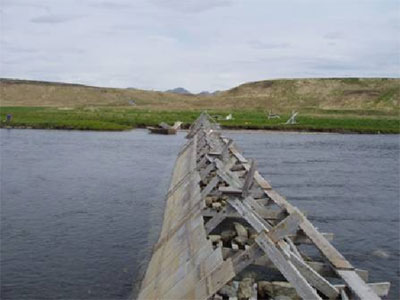 The Ayakulik River weir is approximately 35 m (120’) long and is located about 1.3 km (0.8 mi) upstream from the outlet of the Ayakulik River into the Shelikof Strait, on the southwest side of Kodiak Island. Ayakulik River weir was originally constructed in 1929 at the outlet of Red Lake and operated at that location until 1969. The weir has been at its current location since 1970. The weir is operated by two ADF&G Commercial Fisheries Division employees from late May to early September. In 2010, one ADF&G Sport Fish Division employee assisted with weir operations during the Chinook salmon run from mid-May until approximately 15 July.