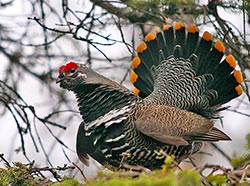 A male spruce grouse struts on a limb.

Tustumena Lake Road winds 6.5 miles through lowland forest to a boat launch on the Kasilof River. Along the road, watch for spruce grouse. Moose can be seen early and late in the day. Along the river, shorebirds and waterfowl forage from spring to fall. Black bears and brown bears rarely appear, but assume they are present and watch for prints in the mud. In May and June, millions of sockeye smolts swim downriver to the sea from their rearing grounds in Tustumena Lake. Returning spawners begin arriving in June and peak in July.

Boreal forest with black spruce, white spruce and paper birch dominates the drive, transitioning in places to a more open forest due to beetle-killed spruce. The glacial river winds through the open woodland, with streamside wetlands and meadows. Willows and alders rim the open zones.

Tustumena Lake is the largest freshwater body on the Kenai Peninsula. Stretching 25 miles toward the mountains, the 60,000-acre lake is notorious for its sudden dangerous winds and 45-degree water.

Drive the road slowly, early in the day, to watch for moose and black bears.

Sterling Highway milepost 110.1. Turn left (east) on Johnson Lake Loop Road. After almost one half mile, turn right on Tustumena Lake Avenue. Follow the road until it ends at the boat launch.