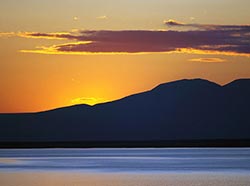 A view of Mt. Susitna from Point Woronzof.
← Resize →

Point Woronzof, near Anchorage's international airport, provides scenic views of Cook Inlet and is a great place to watch the sunset and look for bald eagles, ravens, bank swallows, and moose.

Look for bald eagle nests south of the road near the airport runway and west of the road about a half-mile south of Point Woronzof. In summer, spot the white heads of mature eagles against the dark branches and foliage. These large raptors develop this "bald" head when they are about 5 years old. Until then, they look more like golden eagles. Juvenile bald eagles can be distinguished from golden eagles by the lack of feathers on their legs (or tarsi) and their whitish wing linings.

If you are lucky; the soaring of eagles might be accompanied by raven acrobatics. Ravens are common throughout Alaska and their aerial performances make for great bird watching. Ravens are most active at Point Woronzof from December through March. When the northerly wind blows, they use the updraft along the bluff for play and mating displays. Sometimes groups of 30 or more ravens can be seen showing off to members of the opposite sex.

Point Woronzof also hosts a large bank swallow colony. These birds dig nesting burrows in the silty face of the bluff. Their nest holes are visible throughout the year, but the most exciting time to watch is early summer when hundreds of swallows fly in and out of the colony to feed their young. Approach the bluff edge carefully; it's a long fall to the bottom.

You may also see beluga whales from this high vantage point. They are most common during salmon runs in mid to late summer.

Viewers may encounter one of Anchorage's resident moose along the trail to Point Woronzof, munching on foliage or bedding down. The fence around the airport and the chilly water of Knik Arm funnel moose into a narrow corridor as they walk around the north end of the airport. This is one of the most reliable spots in the city to find a moose. Drive all the way to the end of the road (Clitheroe Center) to increase your odds. Sometimes you see a moose on the way back that you missed driving in.

Moose can be found here and in most of Alaska. They prefer habitats such as hardwood forests, tall-shrub thickets, muskegs, freshwater riparian areas, and coastal wetlands. Watch for newborn calves at the end of May. In late September and October, adult moose are in rut. Bulls with full racks often spar this time of year.

Point Woronzof is accessible from the Tony Knowles Coastal Trail between mileposts 3 and 4. Parking is available in a lot at Point Woronzof, or you can get there from downtown via the Tony Knowles Coastal Trail. If you are driving, travel west on Northern Lights and continue past the airport. The road will curve south and continue to the Clitheroe Center.