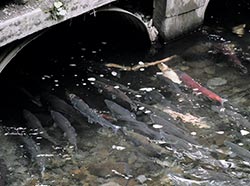 During May and June, millions of smolts are released into Bear Lake and swim down Bear Creek to salt water at the head of Resurrection Bay. Between July and September, some 10,000 to 20,000 sockeye salmon swim seven miles up the creek, peaking in June-July. Coho salmon arrive between late July and September. Cook Inlet Aquaculture Association monitors the migrating salmon at the weir. A viewing spot offers families a great place to watch modern salmon management techniques and to see adult fish attempt to leap the artificial falls. Watch for American dippers along and in the stream below the weir.

Bear Creek weir is an important link in the regional salmon management scheme. Cook Inlet Aquaculture Association operates the weir, under a cooperative agreement with the Alaska Department of Fish and Game, as part of a project to increase sock-eye and coho runs in Resurrection Bay. More than four million young salmon of both species were released into the system in 2006.

Visit in June and July for spawning sockeye, and late July to September for spawning coho. Watch for ruby-crowned and golden-crowned kinglets in the trees. American dippers, which nest upstream of the culverts, can sometimes be seen zipping through the culvert instead of over the road.

The weir compound has very limited parking and a tight turnaround. Just down-stream there is a pullout area next to the creek.

Seward Highway milepost 6.6. Turn east on Bear Lake Road. The weir is just over a half mile ahead on the left. Park on the right (south) side in the unpaved pullout.