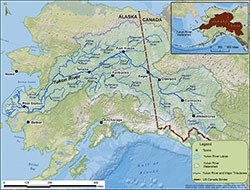 The Yukon River is the largest river system in Alaska, and the fifth largest river drainage in North America. Some Yukon River Chinook salmon migrate over 2,000 river miles to spawn in Canadian spawning grounds within the Yukon Territory. Yukon River Chinook salmon eggs will incubate for one year and, after hatching, these young salmon will rear in freshwater for a few months to two years (but typically one year) before migrating to the ocean. After leaving the freshwater as smolts, these fish spend their first summer rearing in nearshore waters of Norton Sound and the Northern Bering Shelf (north of Nunivak Island). Prior to their first winter at sea, Yukon River Chinook salmon migrate south and further offshore in the Bering Sea where they spend the next 2-5 years before their return back to the Yukon River as adults to spawn.

Until recently, estimation of annual spawning escapements of Yukon Chinook salmon was complicated by a lack of projects that could provide accurate fish counts in the major spawning systems of the Yukon River. In 2005, a sonar project was initiated at Eagle to count Chinook salmon crossing the border into Canada. This border passage estimate combined with harvests of Canadian-origin fish in Alaska determines run size for this component of the total Yukon drainage run. Harvests of these Chinook salmon in Canada are subtracted from the passage estimates at Eagle sonar to determine escapements into Canada and evaluate achievement of the interim management escapement goal of 42,500 to 50,000 fish. Run size and escapements for the Canadian component prior to 2005 are estimated by run reconstruction calibrated to the assessment of fish passage at the Eagle sonar.

Ongoing research efforts will extend this run reconstruction into the Alaska component of the run, using information from subsistence, commercial, and sport harvests along with run size information from the Pilot Station sonar and other counting projects on tributary systems. One major uncertainty in this effort is the estimation of run size downstream from Pilot Station. The Chinook Salmon Research Initiative has recommended that mark-recapture estimates of run size for the entire Yukon drainage be conducted to further calibrate and validate drainage-wide estimates from the run reconstruction. This mark-recapture work will likely begin in 2015 and provide three to four years of independent estimates of drainage-wide run size.

In this project the Alaska Department of Fish and Game and the National Oceanic and Atmospheric Administration are teaming up to calibrate juvenile Chinook salmon abundance indices from large vessel/trawl platforms that have historically been used with a smaller vessel/trawl survey platform that is more economical and utilizes state-owned vessels. This 3-year calibration and transition effort will enable long-term monitoring through more cost-effective surveys, greater involvement of Alaska Department of Fish and Game in collecting and analyzing these data, and will provide continuity of annual data collection. When combined with other new research projects, such as the Arctic-Yukon-Kuskokwim Sustainable Salmon Initiative and North Pacific Research Board funded Yukon River smolt study, this project provides a unique opportunity to discover even more about the early life history and survival of Yukon River Chinook salmon. 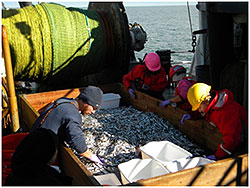 A team of researchers from the Alaska Department of Fish and Game, National Oceanic and Atmospheric Administration and University of Alaska Fairbanks sort the pelagic, or mid-water trawl catch during the 2013 Northern Bering Shelf survey. 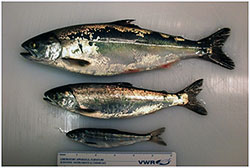 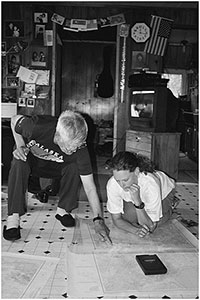 In five Yukon River communities, the Alaska Department of Fish and Game, Subsistence Section will interview selected subsistence harvesters to collect local and traditional knowledge about Chinook salmon. Based on their observations and experience, respondents will discuss biological and environmental factors important to freshwater aspects of Chinook salmon migration, spawning, and larvae/juvenile survival. Areas associated with spawning grounds and rearing habitats will be mapped. Information gathered from these interviews will be compared to the results of research projects to estimate annual Chinook returns and to verify waters included in the State of Alaska Anadromous Waters Catalog.

The goal of this study is to identify variables associated with changing subsistence salmon harvests at the household level in six Yukon River communities. It will be conducted by the Alaska Department of Fish and Game, Subsistence Section and Division of Commercial Fisheries. The project will improve managersï¿½ understanding of how Yukon River subsistence fisheries are structured. In the first phase, a database of post-season household surveys from 1995-2012 will be developed. Pending additional funding, a formal analysis of the data set will develop household harvest histories and explore patterns and trends in harvest levels. In addition, a random sample of fishing households will be interviewed to identify factors that influence year-to-year continuity and variation in harvests in the subsistence salmon fishery. 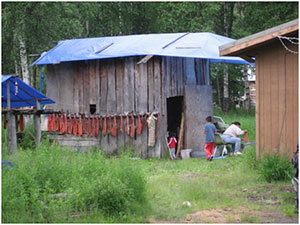 Smokehouse in the community of Grayling

In this project, the Subsistence Section will test methods for in-season collection of subsistence harvest data for Yukon River Chinook and other salmon. Harvest data will be collected during door-to-door surveys. Results will be evaluated in reference to local research assistant capacity and staff oversight, financial cost, and community response. The first phase will occur in Grayling in 2013. After an interdivisional review, phase two will test a revised method in three communities in summer 2014. The project will conclude with an assessment of the overall feasibility of an in-season data collection program and compare findings with the existing post-season harvest survey program.