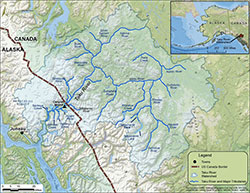 The Taku River is a large glacial system originating in northwest British Columbia and draining into Taku Inlet about 40 km (25 miles) east of Juneau, Alaska. Over the past couple of decades this river has supported runs of Chinook salmon averaging about 35,000 large (essentially 28" and greater in length) fish. After leaving the freshwater as smolt, these fish leave Southeast Alaska and head out to the Gulf of Alaska and Bering Sea where they will spend anywhere from one to five years rearing. In general, the Taku River Chinook salmon harvest rate is around 15% to 20%, having moderate terminal marine harvests in sport and commercial fisheries. Taku River Chinook salmon are also incidentally harvested inriver by the Canadian commercial fleet and in very small numbers in Canadian inriver Aboriginal and recreational fisheries and a U.S. personal use fishery. However, in some years the run is large enough to support directed Chinook salmon fisheries and harvest rates can be as high as 40%; in contrast during years of low abundance, the harvest rates can as low as 3%. Being a large transboundary river, fisheries management on the Taku River falls under the purview of the Pacific Salmon Treaty. As part of a coastwide Chinook salmon rebuilding effort, directed fisheries on Taku Chinook salmon were closed from 1976 to 2004 and were only reopened after many years of developing precise stock assessment information and through bilateral agreement between the U.S. and Canada. Directed fishery openings only occur during very large runs and are monitored very closely throughout.

Abundance of large spawning Chinook salmon is estimated using a mark-recapture study that is conducted annually by the Alaska Department of Fish and Game, Department of Fisheries and Oceans, Canada, and the Taku River Tlingit First Nation. Mark-recapture studies occurred in 1989, 1990, 1995 to 1998, and from 2000 to present. In addition, aerial counts of Chinook salmon take place annually and in five clear water tributaries and were standardized beginning in 1973. In years of no mark-recapture, aerial surveys are relied upon to estimate spawning abundance. Radio telemetry studies were conducted in 1989, 1990, and from 2018 to present. Chinook salmon spawn primarily in the Nakina, Nahlin, and the Kowatua rivers (Pahlke and Bernard 1996 and Courtney et al. in prep).

Estimated percentage of radio tagged large Chinook Salmon spawning locations on the Taku River in 2015 to 2018. Error bars are the standard error of the estimate.

Information on this stock suggests that about 25% of the fish are harvested annually. The Taku River stock is reasonably healthy and since 2000 annual escapements have been above goal in most years; the lower bound of the escapement goal was missed in 2007, 2012, 2013 and from 2016 to 2019. Overall, this stock, like others in Alaska, has experienced a recent decline in productivity.

Spawning escapements of Taku River Chinook salmon, 1974 to 2020. Escapements and goals are germane to large fish (essentially 28" and greater in length).

Since 1973, Taku Chinook salmon spawning abundance has ranged from 7,271 to 114,938 and averaged around 35,000 large Chinook salmon. From April to July, marks are applied to Chinook salmon in the lower Taku River and at the same time, fish are sampled for tag, age, sex, and length information. Then from late-July through early-September, fish are inspected for marks at several spawning areas throughout the drainage and are also sampled for age, sex, and length information. To learn more about how the department conducts this research, project operational plans that outline project methods, results and data analyses are available online beginning with the most recent plan, which covers the 2016 to 2018 mark-recapture projects (PDF 777 kB).

Drift gillnets and fish wheels are used to capture returning Taku River Chinook salmon. Drift gillnets are operated consistently in a 3 km (2 mile) stretch of the lower river a few miles downstream of the international border. Two fish wheels are operated at Canyon Island, roughly 3 km (2 miles) downstream of the international border. In addition to sampling fish for age, sex, and length information, each fish is checked for the presence of adipose fins.

Fish missing adipose fins are additionally sampled for the presence of coded wire tags that would have been applied to fish during their juvenile life stage.Sampled fish are then tagged with an external spaghetti tag and, to mediate against tag loss, given two secondary marks. Farther upriver, fish are captured using set and drift gillnets in the Canadian inriver commercial fishery, or on the spawning grounds using weirs, tangle nets, rod and reel, and carcass foot surveys. All fish are also checked for the presence or absence of an adipose fin, which indicates the possible presence of a coded wire tag.

Information gathered during the adult and juvenile work is combined to estimate the total number of Chinook salmon produced by each parent (brood) year. Return data is also closely analyzed to improve forecasting methods for the Taku River stock of Chinook salmon. 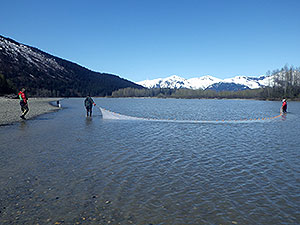 The Alaska Department of Fish and Game, in cooperation with Canadian Department of Fisheries and Oceans and the Taku River Tlingit First Nation, has conducted studies to estimate the abundance of juvenile Chinook salmon in the Taku River drainage since parent (brood) year 1991. Each spring, juvenile Chinook salmon from the same parent (brood) year are marked with adipose fin clips and tagged with coded wire tags as smolt during their out-migration to sea. Over 23,000 Chinook salmon smolt have been tagged annually since parent year 1991 and smolt abundance has ranged from 1.0 million to 3.5 million. 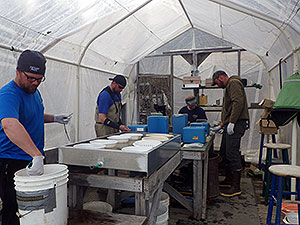 Spring Chinook salmon smolt are captured using minnow traps baited with disinfected salmon eggs and beach seines. After juveniles are captured, they are transported back to camp and are anesthetized, marked, tagged, and held for 24 hours to assess retention of coded wire tags and ensure they are healthy prior to release.

Spring smolt work begins in mid-April and runs through early-June. Early season trapping is conducted in the Taku River mainstem roughly eight miles upstream and downstream of Canyon Island. With increasing water temperatures and depth, larger numbers of out-migrating Chinook smolt are encountered and beach seines are used as the primary method of fish capture.

Taku River Chinook salmon rear at sea from 1 to 5 years and information accumulates annually on these parent year releases as returning adults are sampled. Information of the fraction of fish marked with adipose fin clips is used in combination with adult sampling information to estimate smolt abundance. In addition, the fraction of these fish possessing valid coded wire tag released in the Taku River is used to estimate adult harvests in the various marine commercial and sport fisheries. The estimated harvest of a particular parent (brood) year is coupled with estimates of the parent (brood) year spawning abundance to reconstruct the complete return. Finally, capture rates in the marine fisheries for fish possessing coded wire tags are relevant to the Taku River and aid in fishery management and are used as inseason predictors of run strength and harvest rates.

Taku River freshwater and marine survival for brood years 1991 to 2013.

Chinook salmon smolt abundance and survival have been monitored for the Taku River stock since the 1991 brood year. Freshwater survival has been above average in recent years; however, marine survival has undergone cycles throughout this period and the most recent ten brood years have been below average.