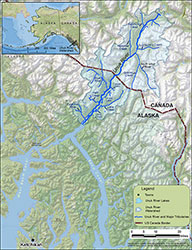 The Unuk River is a glacial system located approximately 85 km northeast of Ketchikan, Alaska. Over the past couple of decades this river has supported runs of Chinook salmon averaging about 5,000 large (essentially 28" and greater in length) Chinook salmon. After leaving the freshwater as juveniles, these fish primarily rear in or near Southeast and this stock is caught incidentally in sport and commercial fisheries in northern and southern Southeast Alaska. Data from this project are used to estimate full parent year production estimates including details on harvest, exploitation rate, and marine survival.

Spawning abundance is germane to estimates of large (essentially 28" and greater) spawning fish determined using mark-recapture studies from 1997 to 2009 and in 2011 (Hendrick, 2008) and aerial/foot surveys in 2010 and from 2012 to 2019). Prior to 1997, aerial surveys were conducted on a consistent basis in 6 clear water tributaries. Due to the loss of the set net site in 2012, there is no longer an adult Chinook salmon mark-recapture study on the Unuk River and calibrated aerial and foot surveys are used to estimate large Chinook salmon abundance.

Available information on this stock suggests that about 29% of the fish are harvested annually. This stock, like others in Alaska, has recently experienced a decline in productivity. From 1977 to 2011, the Unuk River met or exceeded the lower bound of the escapement goal every year. From 2012 to 2017, the Unuk River missed the lower bound of the escapement goal in 5 of 6 years which led to its designation as a stock of concern in 2018. Escapement goals were met in 2018 and 2019. Unuk River salmon research provides fishery managers the tools necessary to manage under the sustained yield principle

Spawning escapements of Unuk River Chinook salmon, 1977 to 2020. Escapements and goals are germane to large fish (essentially 28" and greater in length).

Aerial and foot surveys are conducted annually to estimate the spawning abundance of Chinook salmon in the Unuk River. Since 1977, abundance has ranged between 956 and 10,541 large fish, with an average of 4,558 large fish. In the mark-recapture studies from 1997 to 2009 and in 2011, during June and July, marks were applied to Chinook salmon in the lower river, and at the same time, fish were sampled for tags, age, sex, and length information. Then in late July and August, marks were looked for at 6 principal spawning areas and captured fish were also sampled for age, sex, and length information. Due to the loss of the set net site in 2012, there is not currently an adult mark-recapture project on the Unuk River. Spawning grounds age, sex, and length sampling efforts have increased in August of recent years. Nearly 25% of the large Chinook salmon escapement have been sampled in 2018 and 2019 leading to higher precision in various analyses. 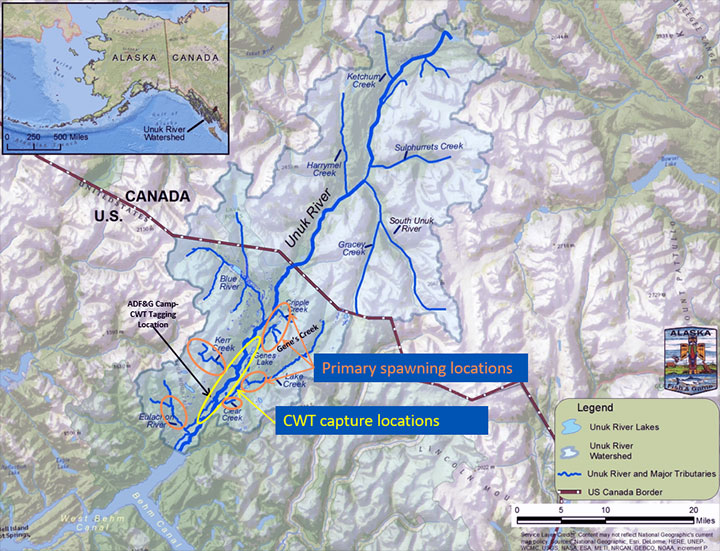 In addition to sampling fish for age, sex, and length information, each fish is checked for the presence of adipose fins. Fish missing adipose fins are additionally sampled for the presence of coded wire tags (CWTs) which would have been applied to fish during their juvenile life stage Sampled fish are then marked with an adipose fin clip and an operculum hole punch for a secondary mark to avoid resampling of fish and then fish are subsequently released. Fish are sampled on the spawning grounds using rod and reel snagging gear, short sections of netting and dip nets or sampled as carcasses.

Project operational plans are published annually to outline project methods, results, and data analyses, and are available on-line. Information gathered from this work is published in the ADF&G Fishery Data Series and is complete through parent years 2005 (PDF 4,924 kB), and 2006 (PDF 2,814 kB).

The ADF&G, Sport Fish Division, has conducted studies to estimate the abundance of juvenile Chinook salmon in the Unuk River drainage since 1994. Juvenile Chinook salmon from the same parent year are marked with adipose fin clips and tagged with CWTs as fingerlings during the fall (September and October), and again the following spring as smolt before they outmigrate to sea in April and May. Tagging in the fall and spring greatly increases the total number of tagged fish leaving the Unuk River. On average, 28,300 fingerlings and 9,623 smolt have been tagged each year and smolt abundance has ranged from 165,000 to 767,000 since 1994.

Fall fingerlings and spring smolt are captured primarily using minnow traps baited with disinfected salmon eggs. After juveniles are captured, they are transported back to camp and are anesthetized, marked, coded-wire tagged, and held for 24 hours to assess retention of CWTs and ensure they are healthy prior to release back into the appropriate habitats.

Fall work begins in late September and spring work begins in early April and runs through early May. Trapping occurs exclusively in the main stem and side sloughs of the lower river.

Unuk River Chinook salmon rear at sea from one to five years and information accumulates annually on these parent year releases as returning adults are sampled. Information of the fraction of fish marked with adipose fin clips is used in combination with adult sampling information to estimate smolt abundance. In addition, the fraction of these fish possessing valid CWTs released in the Unuk River is used to estimate adult harvests in the various marine commercial and sport fisheries. The estimated harvest of a parent year is coupled with estimates of the parent year spawning abundance to reconstruct the complete return.

To learn more about how the department conducts this research Project operational plans are published online annually to outline project methods, results, and data analysis, including the most recent plan which covers the 2017 to 2018 field season. The 2019 to 2022 operational plans are in press.

Unuk River freshwater and marine survival for brood years 1992 to 2012. 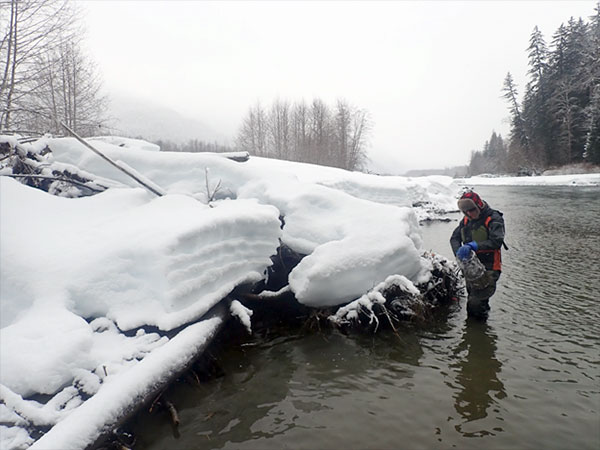 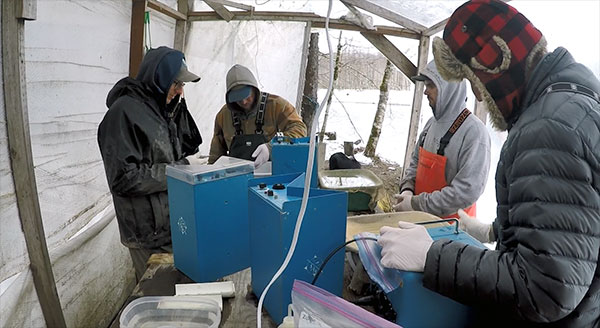 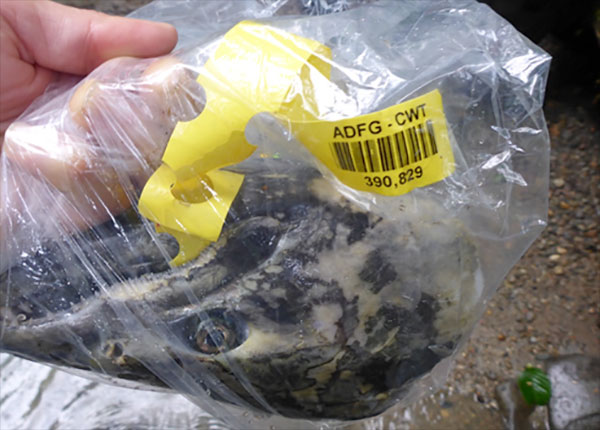