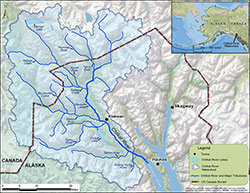 The Chilkat River is a glacial system located near Haines, Alaska that drains into upper Lynn Canal in northern Southeast Alaska. Over the past couple of decades this river has supported runs of Chinook (king) salmon averaging about 5,000 large (essentially 28" and greater in length) fish. After leaving the freshwater as smolt (approximately 2-3 inches in length and mostly 2 years in age), these fish primarily rear in or near Southeast Alaska. A relatively small terminal U.S. marine sport and subsistence fishery targets this stock in Lynn Canal, and harvest also occurs in sport and commercial net and troll fisheries in northern Southeast Alaska. Data from research conducted on this stock are combined to estimate full parent (brood) year production including details on harvest rates and marine survival.

Abundance of large spawning Chinook salmon is estimated using a mark-recapture study that has been conducted annually since 1991 (Ericksen and McPherson 2004). Prior to 1991, aerial surveys were conducted in two clearwater (non-glacial) tributaries, Stonehouse Creek and Big Boulder Creek. Radio telemetry studies conducted in 1991 and 1992 found that spawning abundance in these two tributaries represented less than 5% of the total escapement, and thus did not represent trends in abundance. Aerial surveys were consequently replaced with a more accurate mark-recapture study.

In 1981, a biological escapement goal was set at 2,000 large fish based on an assumed fraction of the total escapement represented by survey counts. Biological escapement goals are determined by the Alaska Department of Fish & Game based on the number of salmon that need to escape to spawn resulting in sustained yields into the future. Ericksen and McPherson (2004) recommended a revised biological escapement goal range of 1,750 to 3,500 large Chinook salmon based on information gathered from the mark-recapture studies along with limited juvenile tagging results. This goal range was reviewed and adopted by the Alaska Department of Fish and Game in 2003, and subsequently reviewed and accepted by the Chinook Technical Committee of the Pacific Salmon Commission in 2004.

Information on this stock suggests that about 20% of the fish are harvested annually. The Chilkat River stock is reasonably healthy and since 1991 annual escapements have been above goal in most years; the management objective was missed in 2007, 2012-2014, and 2016-2018. Overall, this stock, like others in Alaska, has experienced a recent decline in productivity.

Spawning escapements of Chilkat River Chinook salmon, 1991 to 2020. Escapements and goals are germane to large fish (essentially 28" and greater in length).

Alaska Department of Fish and Game, Division of Sport Fish has conducted mark-recapture studies in the Chilkat River drainage every year since 1991. Abundance has ranged from 875 to 8,100 large fish, and averaged 3,350 large fish from 1991 to 2019. During June and July, drift gillnets and fish wheels are used to capture returning adult Chilkat River Chinook salmon. Drift gillnets are operated consistently in a 3km (2 mile) stretch of the lower Chilkat River, which also contains the location of two Chilkat River fish wheels. Once captured, the adult salmon are sampled for age, sex, and length information, and they are checked for the presence or absence of an adipose fin. Fish missing their adipose fin are additionally sampled for the presence of coded wire tags that would have been applied to fish during their juvenile life stage (see Juvenile Abundance below). Sampled fish are then tagged with an external spaghetti tag and with two secondary marks to mediate against tag loss.

From August through early September, returning adult Chinook salmon are captured farther upriver using tangle nets and dip nets, or sampled as carcasses where they are inspected for external tags or marks at three principal spawning areas on the Tahini and Kelsall rivers, and Big Boulder and Little Boulder creeks in the Klehini River. During this sampling they are again examined for age, sex, and length information, and for the presence of an adipose fin. To learn more about how the department conducts this research, project operational plans that outline project methods, results, and data analyses are available online beginning with the most recent plan, which covers the 2013 Mark-Recapture Project (PDF 2,216 kB).

Information gathered during the adult and juvenile work is combined to estimate the total number of Chinook salmon produced by each parent year. Return data are also closely analyzed to improve forecasting methods for the Chilkat River stock of Chinook salmon.

The Alaska Department of Fish and Game, Division of Sport Fish has conducted studies to estimate the abundance of juvenile Chinook salmon in the Chilkat River drainage since 1999. Juvenile Chinook salmon from the same parent year are marked with adipose fin clips and tagged with coded wire tags during September and October, and again April and May as smolt before they emigrate to sea. Tagging in the fall and spring greatly increases the total number of tagged fish leaving the Chilkat River. On average, over 26,000 fall juveniles and 4,000 spring smolt have been tagged each year and smolt abundance has ranged from 60,000 to 290,000 since 1999.

Chilkat River freshwater and marine survival for brood years 1999 to 2013. 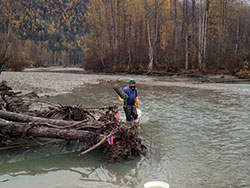 Fall fingerlings and spring smolt are primarily captured using minnow traps baited with disinfected salmon eggs. After juveniles are captured, they are transported back to camp and are anesthetized, marked, tagged, and held for 24 hours to assess retention of coded wire tags and ensure they are healthy prior to release. 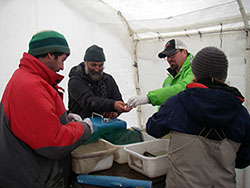 To learn more about how the department conducts this research, project operational plans that outline project methods, results, and data analyses are available online beginning with the most recent plan, which covers the 2013 to 2014 field season (PDF 3,094 kB).