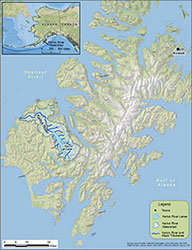 In the Kodiak Area, Chinook salmon are present in 7 known streams. The Karluk River is located on the southwest end of Kodiak Island and supports 1 of only 2 native stocks of Chinook salmon on the Kodiak Archipelago. From its source at the outlet of Karluk Lake, the Karluk River flows 22 miles to its terminus at Karluk Lagoon. Freshwater entry of Chinook salmon occurs during late may through mid-July with 50% of the run typically over by mid-June. All subsistence and commercial inshore harvests are directly reported and sport harvest is estimated by a survey. Karluk River Chinook salmon are harvested incidentally to directed sockeye, pink, chum, and coho salmon commercial fisheries within the Westward Region. 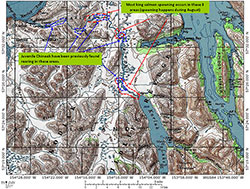 Smolt abundance studies on Karluk River Chinook have not been conducted previously at large scales. One previous study was a trapping survey of the drainage from Karluk Lake to Karluk Lagoon that sought to document rearing habitat used by juvenile Chinook and estimate their abundance. The study identified the lower Karluk River, below the portage, as the primary rearing area for Chinook, but few Chinook were captured and results were somewhat inconclusive. A small scale study using radio telemetry was conducted in 2012 on Karluk Chinook returning to spawn and indicated that the primary spawning habitat was in the lower river near an area around Shasta Creek.

Starting in late April or early May, a crew of three technicians will use baited minnow traps to catch and coded wire tag rearing and out-migrant Chinook over a one-month period, focusing on the lower Karluk River from the Portage to the Lagoon.

Since the mid-1990s, harvest of Chinook salmon in the marine waters of the Westward Region has been fairly consistent and averaging roughly 33,000 fish over the last 20 years. A coded-wire tag recovery study in the Kodiak marine waters in 1994 and 1997 to 1999 showed hatchery stocks from British Columbia, Alaska, and Pacific Northwest dominated in adipose fin-clipped Chinook salmon sampled. These findings are not dissimilar from observer-examined CWT Chinook salmon recovered in foreign trawl and research vessels occurring in international waters of Kodiak and the South Alaska Peninsula during the 1980s through the early 2000s. Genetic analysis of Bering Sea Chinook salmon trawl bycatch from 2005 to 2010 showed the presence of primarily Alaska, British Columbia, and Pacific Northwest stocks; however, of regional interest was the significant presence of North Alaska Peninsula Chinook salmon stocks (14–27%). However, genetic stock identification of the Chinook salmon catch in the Westward Region commercial and sport salmon fisheries has never been conducted. Scientific knowledge of the temporal and spatial presence of both local and non-local Chinook salmon in these catches is of regional, statewide, and international importance. Currently, these harvests cannot be reliably attributed to local wild stocks, hatchery stocks, or non-local wild stocks.

Key biological parameters needed for management of the Chinook salmon fisheries and assessment of marine life stage productivity include stock composition and age structure of the harvest. Fishery managers, regulators and user groups will all benefit from increased knowledge of these parameters, since future stock of origin assignments to harvests enable more precise estimates of abundance and productivity for individual Chinook salmon populations, which helps ensure long term sustainability of the resource. The principal objective of this effort is sample genetics, biological information, and CWT information (on adipose-fin clipped fish only) in the major commercial and sport salmon fisheries in marine waters in the Kodiak, Chignik, South Alaska Peninsula, and North Alaska Peninsula areas where significant catches of Chinook salmon occur. Beginning in 2014, collection of data to determine population age structure and genetic stock of origin will be conducted through temporally stratified sampling of Chinook salmon commercial harvest throughout the Westward Region and of sport harvest dockside at Kodiak City harbors, and occasionally at other locations.

Marine waters surrounding Kodiak Island Archipelago also support a popular Chinook salmon sport fishery which annually harvests an average of 6,600 fish but over the last ten years has averaged over 8,000 fish. Much of the harvest attributable to both guided and unguided anglers comes from Chiniak Bay, which is adjacent to Kodiak city ports, but significant numbers of Chinook salmon are also taken near outlying villages such as Old Harbor and Larsen Bay, and by numerous remotely located lodge operators. Although marine Chinook salmon sport fishing in Kodiak waters occurs year round, the vast majority of annual harvests are recorded between May and September similar to the timing of commercial harvests. 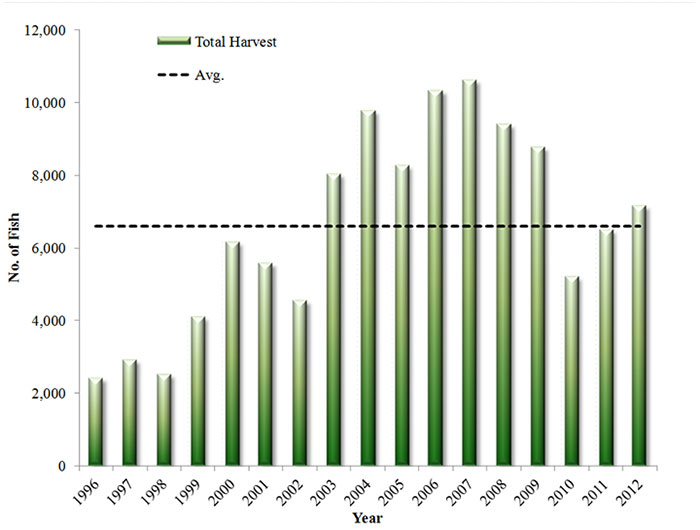 Chinook salmon escapement estimates at the major systems monitored via weirs within the Westward Region, have demonstrated substantial reductions since 2005, often struggling or failing to reach their respective escapement goals and decreased returns throughout Alaska have prompted statewide concern about the health of Chinook salmon stocks.