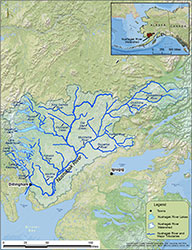 The Nushagak River is located in Southwestern Alaska and flows about 390 km (242 miles) from its headwaters into Bristol Bay near Dillingham. The Nushagak drainage has two main tributaries: the Nuyakuk River, draining Tikchik lakes from the west; and the Mulchatna River, which flows into the Nushagak River from the east. The Nushagak River supports one of the largest Chinook salmon runs in Alaska with an average annual total run index of approximately 235,000 fish and spawning escapement index of approximately 157,000 fish. Chinook salmon are critically important to local subsistence, commercial and sport users. Nushagak River Chinook salmon are managed under guidelines of the Nushagak-Mulchatna King Salmon Management Plan, adopted into regulation by the Alaska Board of Fish in 1992. It was modified in the mid- and late-1990s and again in 2012 to account for the conversion from Bendix sonar counts to dual-frequency identification sonar (DIDSON) counts and application to historical escapement numbers (Buck et al. 2012 - PDF 999 kB). The current sustainable escapement goal is 55,000 to 120,000 fish with an inriver goal of 95,000 (Fair et al. 2012 - PDF 3,114 kB).

Chinook salmon spawning escapement indices on the Nushagak River has averaged about 157,000 over for almost the last 40 years. Spawning escapement counts on the river began in the late 1960s and was initially conducted by aerial surveys. A side-looking sonar known as the ‘Bendix’ replaced aerial surveys as the primary method of monitoring escapement on the Nushagak in the mid-1980s. The Bendix was replaced with the Dual Frequency Identification Sonar (DIDSON) in 2006. While the DIDSON can count individual fish, there are multiple species of salmon in the Nushagak River that are actively migrating while counting is occurring. Therefore it is necessary to estimate the proportion of each species present in the river and apply those proportions to the total sonar count to arrive at species-specific counts. This is accomplished by test-fishing with various sizes of gillnets just below the DIDSON counting zones (Buck and Brazil 2013 - PDF 1,749 kB).

While most sockeye and chum travel along the banks and are therefore easily counted by the DIDSON, the Alaska Department of Fish and Game assumes, based on our generic understanding of Chinook salmon behavior, that some unknown proportion migrate upriver beyond the counting range of the sonar. Therefore, we have always understood that our escapement estimates of sockeye and chum are estimates of abundance while our escapement estimate of Chinook is an index of abundance. The major assumption that allows the department to formulate escapement goals and manage this population based on this index is that we estimate approximately the same proportion of the run each year. In 2011 the department initiated an acoustic tagging study several miles downstream of the sonar to track Chinook salmon migration past the sonar site. This allows department biologists to study their movement patterns with a high degree of precision and determine the proportion of upriver migrating Chinook that travel outside the range of the sonar. This project was initially scheduled to end after 2013 but has been extended through 2016.

The acoustic tagging data should give biologists the proportion of the total Chinook escapement that is not available to our sonar and thus allow for the expansion of the sonar index into a true inriver abundance estimate. Beginning in the summer of 2014 Alaska Department of Fish and Game, Division of Commercial Fisheries and Division of Sport Fish staff will work together to conduct a mark-recapture experiment to estimate the inriver abundance of Chinook salmon in the Nushagak River. The mark recapture estimate will provide an inriver abundance estimate that can be compared with the sonar/acoustic tag estimate outlined above. 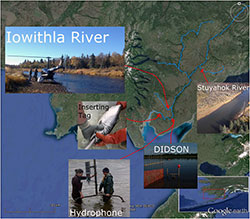 Non-lethal drift gillnets and hook and line methods in the lower Nushagak River will be used to capture Chinook salmon. Each captured fish will be sampled for basic biological information, age, sex, and length information, and all fish captured during this initial tagging will receive a small Passive Integrated Transponder or PIT tag. A subset of these fish will also receive an acoustic tag. Both of these tag types can be detected without physically handling the fish a second time. Externally, fish will also be marked with colored ‘spaghetti’ tags or hole punches through the left operculum, or gill plate. All healthy sampled fish will be released in good condition. Further upstream and later that summer, recaptured fish will be examined for marks at weir sites that the department will establish on the Iowithla and Stuyahok Rivers. The public is encouraged to examine fish caught in the Nushagak River for these marks and return marked fish to the river if caught.

A mark recapture estimate works by sampling a given population and marking all fish caught (event #1) and then resampling, or catching the same fish a second time (event #2) and examining them for the presence of marks or tags placed during event #1. Expanding the number of fish marked in event #1 by the percentage found to be marked in event #2 allows us to estimate the inriver abundance.

Additional feasibility work is scheduled for the spring of 2014. This work will consist of beach seining and minnow trapping the lower Nushagak River below Portage Creek to capture Chinook salmon smolt as they migrate from the drainage. Beach seines and minnow traps have been used for many years to capture out migrating Chinook salmon smolt on several rivers of southeast Alaska. At this time it is unknown when and how many Chinook salmon smolt migrate out of the Nushagak River. The Nushagak River is ice covered in the winter and usually becomes ice free during May. It is possible that smolt begin to migrate while ice covers the river. Work conducted during the spring will help the department determine if smolt begin migrating under the ice and if large enough numbers can be captured to conduct future smolt assessment research. Project operational plans will be published online annually to outline project methods, results, and data analysis.

Coded wire tagging large numbers of juvenile Chinook salmon combined with adult spawning abundance estimates have provided valuable information regarding Chinook salmon stocks for multiple rivers in southeast Alaska. Information obtained from these studies includes estimates of parent year production, harvest from varied fisheries, smolt abundance, and marine survival. The department is considering a coded wire tagging study on the Nushagak River drainage to estimate some of these currently unknown parameters. However, before a project of this magnitude is attempted the feasibility of capturing juvenile Chinook salmon and outmigrating smolt from the Nushagak River must be assessed. Capturing juvenile Chinook salmon with baited minnow traps during the fall is a common strategy. In general, the upper reaches of drainages are targeted during the fall as juvenile salmon are rearing in smaller scale tributaries. The other strategy is the tagging of out migrating Chinook salmon smolt during the spring, which is commonly done on the lower reaches of drainages as smolt migrate out of the drainage. It is unknown which strategy will be most productive on the Nushagak River. If deemed feasible, Chinook salmon juveniles will be marked with adipose fin clips and given a coded wire tag. Later, as returning adults, samples will be taken to determine the fraction of Nushagak River Chinook salmon that possess adipose fin clips. This information in conjunction with total juvenile tagging numbers will be used to estimate juvenile abundance and when coupled with estimates of total run, estimates of marine survival will be made. 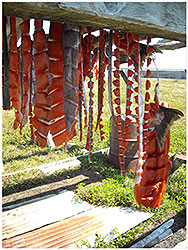 Hanging fish along the Nushagak River.

The Alaska Department of Fish and Game, Subsistence Section, is studying the local and traditional knowledge of Chinook salmon in the Nushagak River. Data, including harvest quantities, gear type, and location, will be collected on subsistence harvests of Nushagak River Chinook salmon through systematic post-season household surveys in four communities. Results will be used to supplement and evaluate harvest data from permit returns. Through participant observation and key respondent interviews in five communities, local and traditional knowledge will be recorded about potential environmental, climate-related, and other factors affecting Chinook salmon returns.

Subsistence fishing on the Nushagak River.