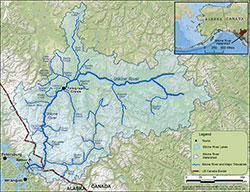 The Stikine River is a glacial system located near Wrangell and Petersburg, Alaska in central Southeast Alaska. Over the past couple of decades this river has supported runs of Chinook salmon averaging about 40,000 large (essentially 28" and greater in length) fish. After leaving the freshwater as smolt (approximately 2-3 inches in length and mostly 2 years in age), these fish rear in the Gulf of Alaska and Bering Sea. In general, the Stikine River Chinook salmon harvest rates is around 15-20%, having moderate terminal marine harvests in sport and commercial fisheries. Stikine River Chinook salmon are also incidentally harvested inriver by the Canadian commercial fleet, and in very small numbers in recreational and subsistence fisheries. However, in some years the run is large enough to support directed Chinook salmon fisheries and harvest rates can be as high as 50% during some of the larger runs. In contrast during years of recent low abundance, the harvest rates can as low as 5%. Being a large transboundary river that originates in Canada, fisheries management on the Stikine River falls under the purview of the Pacific Salmon Treaty. Directed fisheries were closed from 1976 to 2004 and reopened during years having large runs beginning in 2005. Data from adult and smolt projects combine to estimate full parent year production estimates including details on harvest rate and marine survival. Stikine River salmon research provides fishery managers the tools necessary to manage under the sustained yield principle

Abundance of large spawning Chinook salmon is estimated using a mark-recapture study that has been conducted annually since 1996 by the Alaska Department of Fish and Game, Division of Sport Fish, Department of Fisheries and Oceans, Canada, and Tahltan First Nation. Prior to 1996, aerial survey counts were conducted on the Little Tahltan River from 1975 through 2009 and a weir has been operated on the Little Tahltan River since 1985. For a time, these were the primary means of information gathering but were replaced with the more accurate mark-recapture experiment as the main estimation and management tool in 1996.

Estimated percentage of radio tagged large Chinook Salmon spawning locations on the Stikine River in 1997, 2005, 2015 and 2016. Error bars are the standard error of the estimate.

In 1999 a biological spawning escapement goal range was recommended at 14,000 to 28,000 large fish and was estimated using historical run performance constructed from former mark-recapture, weir, and aerial survey abundance estimates. This goal range was reviewed and adopted by Alaska Department of Fish and Game in 1999 and subsequently reviewed and accepted by the Chinook Technical Committee of the Pacific Salmon Commission and the Canadian Science Advisory Secretariat - Pacific in 2000.

Information on this stock suggests that about 30% of the fish are harvested annually. The Stikine River stock is reasonably healthy and since 2000 annual escapements have been above goal in most years; the lower bound of the escapement goal was missed in 2009 and 2016 to 2019. Overall, this stock, like others in Alaska, has experienced a recent decline in productivity.

Spawning escapements of Stikine River Chinook salmon, 1975 to 2020. Escapements and goals are germane to large fish (essentially 28" and greater in length).

The Alaska Department of Fish and Game, Division of Sport Fish, has conducted mark-recapture studies in the Stikine River drainage since 1996. The ongoing Chinook salmon research on the Stikine River is conducted cooperatively between Alaska Department of Fish and Game, the Department of Fisheries and Oceans Canada, and the Tahtan River First Nation. Since 1975, spawning abundance has ranged from 5,723 to 63,523 and averaged around 25,000 large Chinook salmon. From May to early July, marks are applied to Chinook salmon in the lower Stikine River near Kakwan Point and constitute the first event of the mark-recapture experiment. Fish are captured using drift gillnets. When a fish is caught in the net it is immediately pulled in, the fish is gently cut out of the net and then marked with an individually numbered spaghetti tag and sampled for age, sex, and length information and released alive. To detect potential tag loss, a secondary mark is applied that is easily detected in the event the original tag is lost. Tagged Chinook salmon are then potentially recaptured at three locations making up the second event of the mark-recapture experiment. The first is in the Canadian commercial fishery, and then from June to early September, fish are inspected for marks at the Little Tahltan Weir as well as concentrated sampling for spawning fish on the Verrett River in August which is a small spawning tributary for Chinook salmon in the Iskut River drainage. Chinook salmon encountered at all capture locations are inspected for missing adipose fins that may indicate that they were marked as juveniles with a coded wire tag (see Stikine River coded wire tag research). 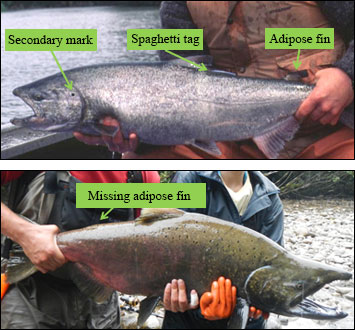 Since coded wire tags are implanted in the nose of juvenile Chinook salmon, the heads are removed from all encountered fish that are missing their adipose fins and sent to the Alaska Department of Fish and Game Mark Tag and Age Lab for detection of the tag and consequent identification via numbering on the tag of the fish's origin and age. To learn more about how the department conducts this research, project operational plans that outline project methods, results and data analyses are available online. The most recent plan covers the 2016 to 2018 mark-recapture projects.

Information gathered during the adult and juvenile work is combined to estimate the total number of Chinook salmon produced by each parent year. Return data is also closely analyzed to improve forecasting methods for the Stikine River stock of Chinook salmon.

The Alaska Department of Fish and Game, Division of Sport Fish, has conducted studies to estimate the abundance of juvenile Chinook salmon in the Stikine River drainage since 2000. Juvenile Chinook salmon from the same parent year are marked with adipose fin clips and tagged with coded wire tags in the spring (April and May) as smolt before they outmigrate to sea. Due to the large size of the Stikine River drainage, tagging in the spring is the most effective method as compared to fall tagging of fry in other rivers as the smolt are concentrated and it helps ensure that a mixture of the different stocks are equally likely to be tagged. 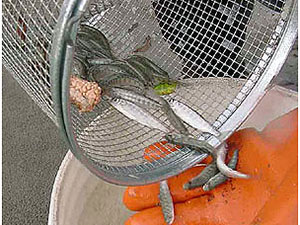 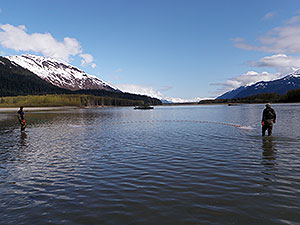 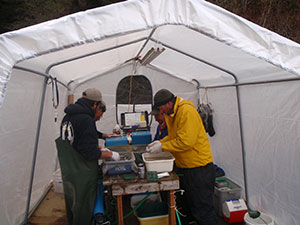 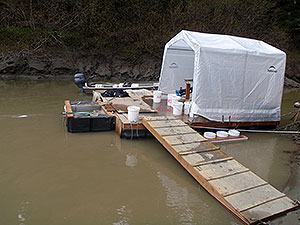 Since coded wire tag operations on the Stikine River have targeted outmigrating smolt, beach seining on large gravel bars with multiple crews is the most effective capture technique found after more than ten years of operations but baited minnow traps are also used at times. After capture and transport back to camp, they are anesthetized, marked, tagged, and held for 24 hours to assess retention of coded wire tags and to make sure they are healthy prior to release. The spring work starts in mid-April and ends in early June.

Stikine River Chinook salmon rear at sea from one to five years and information accumulates annually on these parent year releases as returning adults are encountered in different fisheries and sampled. The fraction of fish marked with adipose fin clips in these fisheries is used in combination with adult sampling information to estimate smolt abundance. In addition, the fraction of these fish possessing valid coded wire tag released in the Stikine River is used to estimate adult harvests in the various marine commercial and sport fisheries. The estimated harvest of a particular parent year is coupled with estimates of the parent year spawning abundance to reconstruct the complete return. Finally, capture rates of Stikine coded wire tags in the marine fisheries facilitates management and are used as inseason predictors of run strength and harvest rates. An average of 30,300 and up to 48,500 smolt have been tagged each spring in the Stikine River and smolt abundance has ranged from 1.2 million to 4.5 million since 2000.