Diverse and abundant wildlife are central to Alaska’s economy and people. Over 1,000 vertebrate species are found in the state, sometimes in huge numbers. More than 900,000 caribou roam in 32 herds across vast tundra landscapes. On the Copper River Delta alone, five to eight million shorebirds stop to forage and rest each spring on their way to arctic breeding grounds. Alaska has 32 species of carnivores, more than any other state. 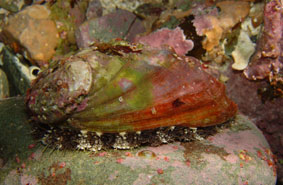 The pinto abalone is the only abalone species found in Alaska.