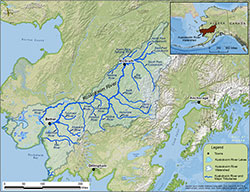 The Kuskokwim River is the second largest river in Alaska, draining an area approximately 130,000 km2, (approximately 50,200 square miles) which represents 11% of the total area of Alaska. Adult Chinook salmon returning to the Kuskokwim River historically supported subsistence, commercial, and sport fisheries, in which annual harvests were 60,000 to 160,000 fish. The Chinook salmon subsistence fishery in the Kuskokwim Area is the largest in the state and remains a fundamental component of local culture (Brazil et al. 2011). The Kuskokwim River also had a lucrative commercial fishery for Chinook salmon through the early 1990s but directed commercial fishing for Chinook salmon ended in 1987. Since 1976, total Chinook salmon harvest from subsistence, commercial, and sport fisheries has resulted in exploitation rates ranging from a high of 62% in 1988 to a low of 13% in 2015 and 2017. Below average run sizes in recent years have resulted in restrictions to fishing opportunity and failure to meet some escapement goals.

Annual estimates of the total abundance of adult Chinook salmon that return to the Kuskokwim River are important for ensuring the population is managed in ways that promote long-term health and sustain existing fisheries. A time-series of abundance estimates, spanning several Chinook salmon generations, allows fisheries biologists to understand changes in productivity, which is an important first step to investigating the key drivers of Chinook salmon health. Abundance and productivity estimates are also used to establish escapement goals, forecast future run size, and evaluate the number of fish that can be harvested annually.

The completion of the initial mark-recapture studies formed the foundation for a series of subsequent analyses that drastically improved our understanding of Kuskokwim River Chinook salmon productivity. First, Division of Commercial Fisheries was able to estimate total annual abundance of Kuskokwim River Chinook salmon from 2003 to 2007 by combining the mark-recapture estimates with estimates of harvest and escapement downriver. These five years of abundance information were used to scale a statistical run reconstruction model which provided estimates of total run size and escapement from 1976 to 2012. The time series of abundance estimates was used to evaluate the productivity of Kuskokwim River Chinook salmon and establish the current formal escapement goal for the entire river of 65,000 to 120,000 fish.

The Chinook Salmon Research Initiative recommended that the Kuskokwim River Chinook salmon run reconstruction model and productivity analyses be periodically recalibrated, particularly during years of low abundance. Towards that goal, the Division of Commercial Fisheries partnered with groups and agencies to conduct a four-year mark-recapture study beginning in 2014. In 2014, estimates of the number of fish returning to the middle and upper portions of the Kuskokwim River were combined with estimates of harvest and escapement downriver of the study area to estimate the total run size in 2014. Between 2015 and 2017, mark-recapture project operations were moved downriver from Bethel and below all major Chinook salmon spawning tributaries. Abundance estimates from the mark-recapture studies conducted between 2015 and 2017 were combined with annual harvest and escapement estimates downriver of the study location to estimate total run size of Chinook salmon. The additional four years of abundance estimates were used to further scale the run reconstruction model used to produce annual estimates of total run size and escapement on the Kuskokwim River. The run reconstruction model has been used annually since 2013 as a postseason tool to determine if the drainagewide escapement goal was achieved. Model results have also been used since 2012 to inform preseason management strategies to achieve escapement goals.

The 2015 to 2017 mark-recapture experiments and aerial surveys conducted between 2014 and 2016 provided an opportunity to evaluate potential bias in the data from 2003 to 2007 used to scale the run reconstruction model. In those years, total run scalars were developed by adding estimates of abundance from mark-recapture experiments conducted upriver from where most of the harvest occurs to all harvest and escapement downriver from the tag site. Habitat-based methods were used to estimate escapement to unmonitored tributaries from 2003 to 2007 and those methods had long been suspected of overestimating true escapement to those systems. ADF&G combined telemetric and aerial survey methods to evaluate escapement distribution in the lower Kuskokwim River spawning tributaries. Results of this work showed that the habitat-based methods used by ADF&G likely overestimated escapement to unmonitored tributaries nearly two-fold. As such, revisions were made to the 2003 to 2007 model scalars.

The Alaska Department of Fish and Game, Subsistence Section interviewed selected subsistence harvesters to collect local and traditional knowledge about Chinook salmon. Based on their observations and experience, interviewees discussed biological and environmental factors important to the freshwater aspects of Chinook salmon migration, spawning, and larvae/juvenile survival. Areas associated with spawning grounds and rearing habitats were mapped. Information gathered from these interviews were compared to the results of research projects to estimate annual Chinook returns and to verify if appropriate rivers and streams are listed in the State of Alaska Anadromous Waters Catalog.

Patterns and Trends in Subsistence Fishing

Inseason estimates of subsistence harvest of Chinook salmon in a reach of the lower Kuskokwim River were made to test the efficacy of the study as an estimator of total subsistence harvests. This work was conducted with selected fishers from three communities who recorded their harvest and fishing effort, and then reported their data to the Alaska Department of Fish and Game twice a week. Using a weighted average of sample fishers' harvests, an estimate of the total subsistence Chinook harvest was developed. At the end of the season, these estimates were compared with estimates based on post-season household harvest surveys.