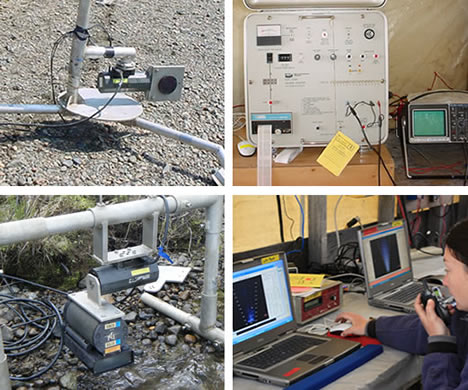 At the Nushagak River sonar site, ADF&G detects fish using a type of sonar technology known as DIDSON. ADF&G has been using sonar to monitor salmon in the Nushagak River since 1979, but has only been using DIDSON for generating escapement estimates since 2006. Before DIDSON the site used a type of sonar known as Bendix. The site used DIDSON and Bendix side-by-side for three years before completely transitioning to DIDSON to generate estimate data in 2006 (see comparison report). Before sonar, Nushagak salmon runs were gauged with aerial surveys and counting towers.

The advantages of DIDSON at the Nushagak site

DIDSON offers many useful advantages over using Bendix sonar at the Nushagak sonar site. With the Bendix counter, for example, we could not determine fish travel direction only that a fish had passed through the sonar beam. With DIDSON we can now separate downstream from upstream fish and count only upstream fish towards our estimates. And we can pause or replay DIDSON video files to facilitate accurate counting at the peak of the sockeye migration, when more than 100,000 fish may pass by the site in a single day. We can also replay old files for quality assurance, whereas Bendix does not store reviewable data, but only produces final counts. Finally, the DIDSON's much better ability to detect fish over non-linear river bottom profiles has been particularly useful. When the site relied on Bendix sonar, the sonar technology's poor ability to handle non-linear river bed profiles and a deep curvature in the near shore riverbed at the site, required the sonar site crew to deploy four transducers to cover sockeye salmon migration areas. With the introduction of DIDSON, the site can now cover the same area using just two sonar transducers.

How ADF&G uses DIDSON at the Nushagak site 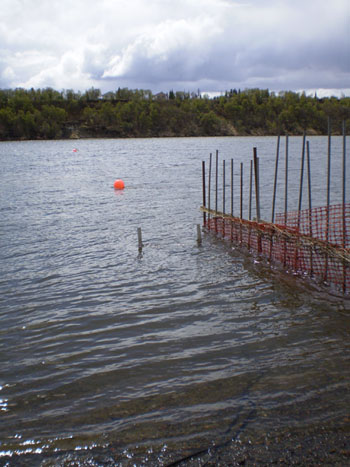 We install a partial weir extending from the submerged DIDSON transducer to shore to prevent fish from swimming behind the transducer where they cannot be detected.

In December of 2012, ADF&G fisheries biologists will propose an increase in Nushagak king salmon escapement goal numbers. In recommending the increase, biologists do not intend to allow more king salmon to escape upstream, but to change the way they report king salmon counts from Bendix units to DIDSON units. Just as converting a 50-mile speed limit into an 80-kilometer speed limit increases the number on speed limit signs, but not the actual speed at which you are allowed to travel, converting from Bendix to DIDSON units will increase the goal number, but not king salmon escapement. Bendix and DIDSON count kings differently because DIDSON counts a larger proportion of the king salmon that migrate past the sonar site. On the other hand, there is little difference in the way Bendix sonar and DIDSON count Nushagak sockeye. Consequently, no conversion is necessary for reporting DIDSON-detected sockeye numbers and sockeye goals will not be changed as a result of the transition between the two technologies.

Generally sonar operations begin around June 3 and continue until July 20 to correspond with the sockeye and king salmon runs. Sonar is not operated during the subsequent coho and pink salmon runs. The sonar site has not been found to be a very strong tool for estimating escapement for pink and coho salmon. This is particularly true for coho salmon, which like king salmon, have a tendency to swim beyond the detection range of the sonar. And during even years coho are very difficult to separate from much more numerous pink salmon. To make the best use of limited resources, the department ends sonar site operations as sockeye and king salmon runs end in July rather than continue into August or September to estimate subsequent runs of coho and pink salmon.