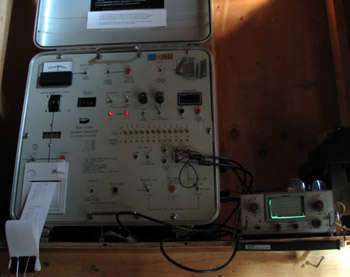 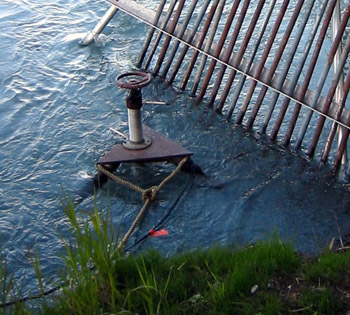 Sockeye salmon migrating through swift currents past the sonar site swim close to shore rather than in the middle of the river to conserve energy (see energy-conserving behavior study). Consequently, ADF&G does not need to use sonar to detect fish across the entire river width. ADF&G uses the sonar to detect fish up to 40 feet from the north bank and up to 13 feet from the south bank. Sockeye salmon swim close to shore and particularly along the south bank where an especially strong and swift current forces fish against the shore.

Bendix sonar data processing is minimal compared with newer technologies and, consequently, can be run continually all day every, day during the season. Technicians spend at least two hours per bank per day calibrating the sonar. The sonar site operates from June 24 until after the commercial fishery closes. The site ends operations once there have been three continuous days in which the site’s sockeye salmon count represents one percent or less of the total sonar count for the season, which usually occurs in early August.

The Crescent River sonar site is the only ADF&G project that still uses Bendix sonar. ADF&G has not invested in new technology to replace Bendix sonar at this site because information from this project has a lower priority compared to other salmon assessment projects and there is uncertainty as to how long operations at Crescent River will continue.