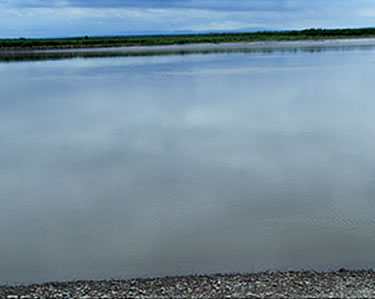 A new Kvichak River sonar site may be established at the village of Levelock, about 20 miles from the commercial fishing district in Bristol Bay and about 50 miles downstream of the counting tower near the outlet of Lake Iliamna.

There is currently no sonar site for estimating adult salmon returns in the Kvichak River, but a feasibility study is underway. In 2010, the Alaska Department of Fish and Game surveyed the lower river near Levelock, Alaska to find a suitable sonar site. This began a four-year study to field-test dual-frequency identification sonar (DIDSON) in the lower river for estimating sockeye salmon passage.

The river and the fish

The Kvichak River drainage is one of the world's most productive sockeye salmon systems. It also represents a major subsistence fishery, supporting the cultural traditions of many native communities. From its headwaters in Lake Iliamna, the river flows about 70 river miles to Bristol Bay. The Kvichak River drainage owes its abundance of sockeye salmon primarily to Lake Iliamna and Lake Clark, which provide an abundance of sockeye spawning habitat.

Kvichak River sockeye runs are managed based on a tower count and an inriver gillnet test fishery index. The counting tower provides reliable escapement estimates, but does not encounter salmon until they have already migrated 70 miles past the commercial fishery in Bristol Bay. The test fishery provides salmon abundance data within 20 miles of the commercial fishery, but has a high margin of error when compared with tower escapement counts. 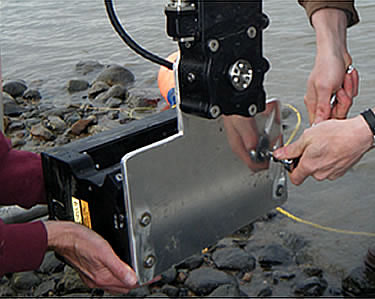 If the feasibility study goes well, a new sonar site using DIDSON will replace the test fishery. In addition to providing more accurate data, DIDSON would be less labor intensive and more cost-effective then the test fishery.

ADF&G biologists believe a sonar site could be established within the same vicinity as the test fishery and provide more reliable abundance data. The lower Kvichak River is a difficult location in which to operate sonar due to strong tidal influences. Before DIDSON, sonar could not be used to count sockeye in an area with major water fluctuations without missing a large number of fish. But the DIDSON is more versatile than the sonar technologies before it. Biologists can position two DIDSON transducers at the low-tide water mark—one facing offshore, as is traditionally done, and a second facing toward shore. The second DIDSON transducer covers the range from the low-tide mark to the high-tide mark when water level rises.