Monitoring the abundance of returning salmon is critical for effective fisheries management and a variety of tools are used. In addition to sonar, the Alaska Department of Fish and Game also uses weirs, counting towers, mark-recapture projects and aerial and ground surveys to estimate returning salmon abundance and escapement. Each of these tools has different strengths. Weirs and towers, for example, provide the most reliable escapement estimates, while aerial surveys provide a cost-effective way to estimate escapement in many streams. And in a large or muddy river, only sonar can be used close to the river mouth where the most timely salmon abundance data can be gathered. Typically the best approach for monitoring returning salmon abundance and escapement includes a combination of tools. Biologists might, for example, use sonar to monitor fish passage near the mouth of a river while using weirs to estimate escapement into the tributaries that feed into the river. 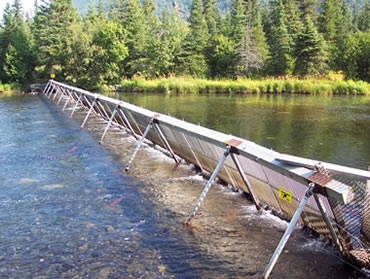 A fish weir is essentially a fence installed across flowing water to block the passage of fish. ADF&G weirs installed to count salmon prevent fish from migrating upstream until a technician opens a gate to release them through an opening in the weir. As the fish pass through the opening, the technician can count each and every fish. Weirs provide the most accurate method of counting returning salmon. They are also cost effective and can be easily used to collect sex and length data and scale and tissue samples from salmon. But weirs can only be used to count salmon in narrow, shallow streams. 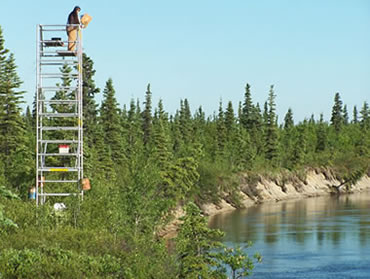 Counting towers are installed alongside clearwater streams to provide an unobstructed view of migrating fish. Every summer, ADF&G hires technicians to count salmon throughout the state using counting towers. Generally, a technician counts fish for 10 minutes each hour on each side of the stream. This number is then extrapolated to represent a full hour. A team of technicians will monitor the tower in this manner 24 hours a day seven days a week for the entire season. Counting towers have minimal equipment costs and provide reliable counts, but only work in clear, shallow streams where fish swim close to shore and are highly visable. 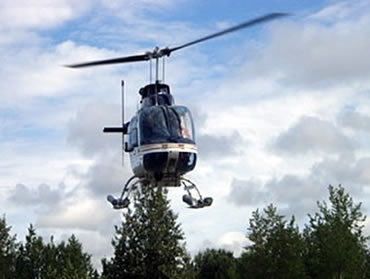 In a typical mark-recapture project, biologists capture and tag a sample of the salmon migrating up a river and release them back into the general population. They then resample the salmon population further upstream, capturing untagged salmon and recapturing some of the tagged salmon. Upstream sampling usually takes place at fish wheels or weirs located in the river’s tributaries. Assuming the proportion of tagged salmon in the upstream sample and the total population is the same, biologists can use the total number of tagged fish and proportion of the upstream sample that is tagged to estimate population size. If, for example, one third of the sockeye salmon caught at a weir are tagged, and 500 sockeye salmon were tagged in the river’s main stem then a biologist might estimate a total population of 1,500 sockeye salmon entered the river. Mark-recapture projects work best in rivers where there are tributaries in which a large portion of the run can be recaptured and scanned for tags. One of the drawbacks of mark-recapture projects is that the abundance estimates can become biased if tagged fish are more likely to die than untagged fish before reaching the second sample site upstream. Consequently, tagged fish must be handled with great care.

In addition to the abundance and escapement information collected with sonar, weirs, towers and aerial surveys, fisheries managers also gauge the strength of salmon runs using information that can serve as an index of salmon abundance. Some examples of abundance indices are commercial fishery catch (documented from fish tickets), sport fishery catch per unit effort (CPUE, number of fish caught in a standardized period of time) and test fishing CPUE. Test fishing often takes place in marine waters near the river into which the monitored salmon stock is returning, but can also take place in a river and always takes place in the same location. These indices provide important information about the abundance of fish relative to other days and years. 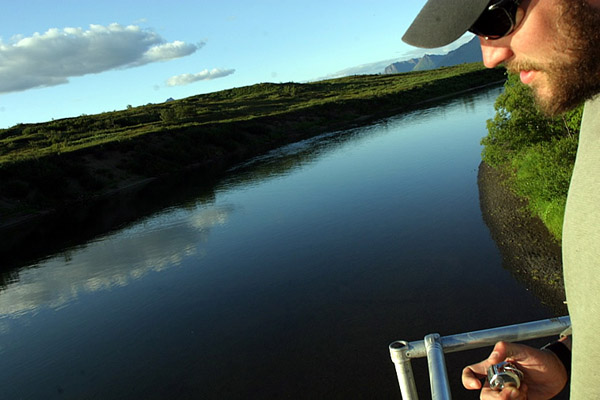 Technicians count salmon as they pass below a tower or through a weir by clicking a button on a hand-held counter.