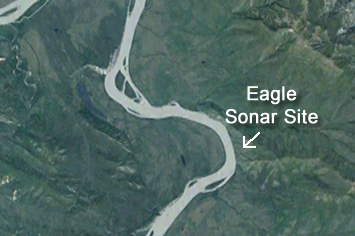 The sonar site is located about 18 miles downstream from Alaska's border with Canada. Conditions for detecting fish with sonar at the site are favorable.

Of all the salmon that migrate past Alaska Department of Fish and Game sonar sites, salmon migrating past the Eagle Yukon River sonar site travel the furthest. Salmon that reach the Eagle sonar site have traveled 1,200 miles upstream. And as they migrate past the site and into Canada some travel more than 2,000 miles before they stop to spawn. Because they are shared between two countries, these salmon are managed according to precautionary, abundance-based, harvest - sharing principles outlined in the Yukon River Salmon Agreement the United States has signed with Canada. Eagle sonar project escapement estimates for king and fall chum salmon help ensure agreement obligations are being met and that Canadian-origin stocks are managed sustainably. ADF&G runs the sonar site in cooperation with Oceans and Fisheries Canada, which provides two of the site's technicians.