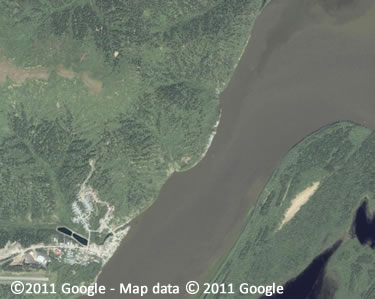 The Pilot Station sonar site is in the lower section of Alaska’s longest river and along the widest stretch of river in which ADF&G uses sonar to detect fish. Also in the lower Yukon River, riverbed profiles, silt and debris levels can fluctuate dramatically

Estimating Yukon River salmon passage at the Pilot Station sonar site is a formidable challenge. The site is in a section of the river that is more than a half-mile wide, where large runs of multiple species arrive at the same time and where spring breakup flushes rafts of trees and heavy silt downstream. The Alaska Department of Fish and Game operates the site despite these challenges to provide fisheries managers with timely data on salmon abundance. Managers also rely on other sources of information including, a test fishery in Emmonak, reports from fishermen and other sonar sites in the Yukon drainage. Yukon fisheries management is complex. Many of the salmon that migrate into the Yukon River come from Canadian origin stocks. These salmon are managed under an agreement between the US and Canada to ensure enough of them cross the border to spawn and to provide fishing opportunities on both sides of the border. Yukon River salmon are important to native heritage in both countries supporting 12,000 Alaskan subsistence fishermen and 4,000 Canadian First Nation fishermen.