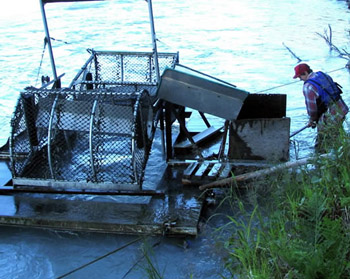 Estimating the abundance of a particular species of salmon in a river is easiest when they are not mixed with other fish species. Since sonar cannot identify fish by species, almost all Alaska Department of Fish and Game sonar sites use either gillnets or fish wheels to separate sonar-detected fish by species. At the Crescent River sonar site, ADF&G uses a fish wheel. A fish wheel scoops fish out of the river with large baskets and deposits them into a live box. The relative proportion of sockeye salmon to other species caught is examined to determine how many of the sonar-detected fish should be counted as sockeye salmon. Typically for the first few weeks of the season salmon migrating up the Crescent River are almost entirely sockeye. A small number of chum and pink salmon begin to arrive in mid July and larger numbers of chum begin to arrive around the first of August.

Crescent River technicians operate the fish wheel every day during the field season. In addition to documenting data about the species composition of the catch, technicians also collect gender and length data, and scale samples from the sockeye salmon. Fish age, determined from the scale samples, and length and gender data are used to identify trends in returning sockeye runs from year to year.