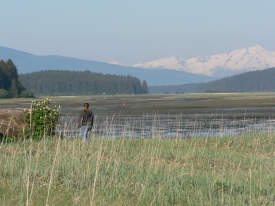 The Mendenhall Wetlands State Game Refuge encompasses approximately 4,000 acres of critical habitat for migrating and resident birds. As tides ebb and flow across the wetlands, much of the refuge alternates between a pasture and a shallow sea. Over the course of a year, the diverse plant communities feed or shelter more than 140 species of birds, nearly a dozen different mammals, eight anadromous fishes, and an abundance of other marine life.

Freshwater streams tumble down to meet the saltwater wetlands that cradle north Gastineau Channel. The result is a rich and fertile feeding environment for many birds.

The largest number of birds can be seen at the wetlands during spring migration in April and May. In late July, southbound shorebirds stop here to feed on marine invertebrates. Waterfowl arrive in late August and September.

The primary access points for birders and other wildlife watchers are at Fish Creek on Douglas Island and off Radcliff Road at the west end of the airport.

Plan to spend at least: 2 hours - half day