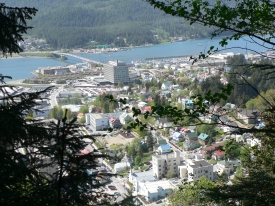 You might begin your wildlife viewing adventure in Downtown Juneau, where bears and porcupines sometimes wander through town. Scan Mount Juneau’s steep faces for mountain goats; public spotting scopes in Marine Park allow a closer look. Look down into Gastineau Channel for the shiny heads of harbor seals, as well as large rafts of surf scoters, which are common in spring and early summer. Gold Creek has a small salmon run each August, and great blue herons fish at the mouth of Gold Creek year round, along with harlequin and mallard ducks. Bald eagles frequently fly over town, often harassed by crows.

While in downtown Juneau, uou are never more than a few blocks from prime wildlife habitat.

Check the avalanche slopes on the mountains above town to spot black bears feeding on vegetation.

There is a wheelchair accessible spotting scope in Marine Park.

Pick up a map of downtown from the Juneau Convention and Visitor's Bureau visitor center in Centennial Hall.