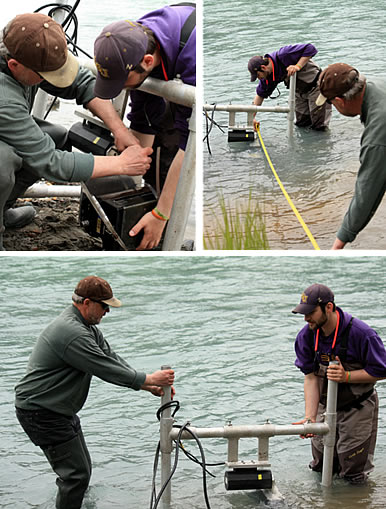 A DIDSON sonar transducer is deployed from each bank of the sonar site and aimed offshore and perpendicular to the current.

At the Kasilof River sonar site, the Alaska Department of Fish and Game detects fish using a type of sonar technology known as DIDSON. ADF&G has been using sonar to monitor salmon in the Kasilof River since 1968, but has only been using DIDSON for generating escapement estimates since 2010. Before DIDSON the site used a type of sonar known as Bendix. The site used DIDSON and Bendix side-by-side for three years before completely transitioning to DIDSON to generate estimate data in 2010 (click here to see comparison report).

Although the Kasilof River is too wide to install a weir, it is one of the narrowest rivers where ADF&G uses sonar to detect salmon and one of the few in which the detection range of shore-based sonar transducers covers the entire width of the river. Even if the site's sonar did not cover the entire width of the river it is likely that the site would still detect nearly all of the fish swimming by. Due to the river's swift currents, most sockeye salmon migrate within five meters of the bank. And the river's generally smooth riverbed profile in near-shore areas allows the sonar beam to more thoroughly cover fish migration areas. Along very uneven riverbeds, rifts and ridges can create shadows in the area covered by the sonar beam, providing areas where fish can swim past undetected.

At the Kasilof River site, and nearly every other sonar site in the state, ADF&G biologists use sonar to sample over time rather than run sonar continually. From each bank, sonar site crew record 10-minute sonar snapshots each hour, which fisheries biologists then expand to represent a full 24-hour period. Research has found the difference in estimates generated while running sonar continually and estimates generated while sampling is very small. But the difference in operational costs is huge (click here to see study on sampling methods). 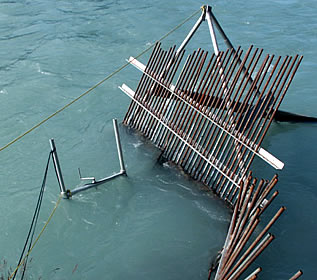 A partial weir is installed downstream of each of the sonar transducers to prevent fish from swimming behind the transducer where they cannot be detected.

The sonar site operates from June 15 until after the commercial fishery closes. The site ends operations once there have been three continuous days in which the site's sockeye salmon count represents one percent or less of the total sonar count for the season.

There has been some confusion over how the transition from data collected with Bendix sonar to data collected with DIDSON impacted the Kasilof River escapement goal. At many of the sonar sites that have transitioned from Bendix sonar to DIDSON, DIDSON has been found to count more fish because it is better at detecting fish under difficult conditions. When this happens, ADF&G changes the river's escapement goals to reflect the improved counting methods (for more on what this adjustment means for escapement goals click here). Because conditions for detecting fish with sonar on the Kasilof River are very good, there was only a very minor difference in the fish counted by Bendix sonar and DIDSON. But when Kasilof River sockeye salmon escapement goal numbers changed in 2011 fishermen tended to believe DIDSON played a bigger role in the changes than it actually did. Kasilof goal changes were primarily due to greater than expected returns from large escapements of Kasilof sockeye salmon. For more details on 2011 changes in the Kasilof escapement goal and how sonar factored into those changes click here (PDF File).