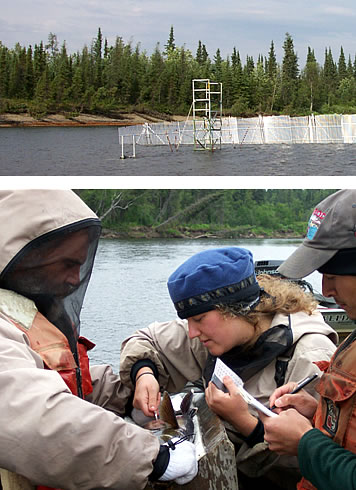 A counting tower installed alongside the right bank sonar transducer is used to determine how many of the sonar-detected fish should be counted as chum salmon (upper right). Technicians take scale samples from a chum salmon captured with a beach seine net (right).

In addition to using sonar and a tower to count and separate fish by species, site technicians also use beach seine nets to capture fish for data collection and scale sampling. Technicians beach seine just downstream of the sonar site three times per week, tallying and recording captured fish by species before releasing them. Before the chum salmon are released, technicians record length, gender and take a scale sample. The scale samples can be analyzed to determine age, and biologists use the gender, length and age information to identify long-term trends in Anvik summer chum runs. If any king salmon are caught, they are sampled using the same methods as for chum salmon.