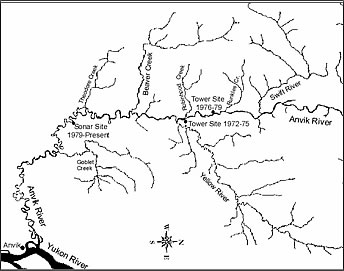 The Anvik River flows in a southerly direction approximately 125 river miles from its headwaters to its mouth, where it empties into the Yukon River at river mile 318. This narrow runoff stream has a substrate of mainly gravel and cobble. Bedrock is exposed in some of the upper reaches. A major and very turbid tributary, the Yellow River, empties into the Anvik River at river mile 62. Downstream from the confluence of the Yellow River, the Anvik River changes from a moderate-gradient system to a low-gradient system and meanders through a broad flood plain.

The lower Anvik River, which includes the sonar site, flows through numerous oxbows, old channel cutoffs and sloughs. It is characterized by broad meanders with large gravel bars on the inside bends and cut banks with exposed soil, tree roots and snags on the outside bends. At the sonar site, the river substrate is fine, smooth gravel, sand and silt, and its bottom profile remains generally consistent from year to year.  The right bank slopes gradually, while the left bank river bottom slopes steeply.