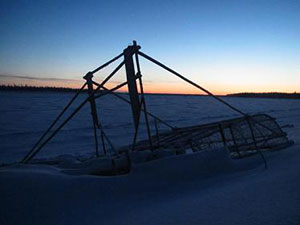 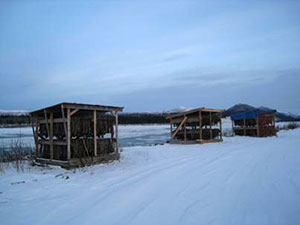 Chum salmon drying in November on the Yukon River in Eagle, Alaska. Photo by Danielle Ringer

Chinook salmon, summer and fall chum salmon, and Coho salmon comprise the majority of salmon harvests in the Yukon River drainage. While there are limited commercial salmon opportunities in the lower river, unlike many marine and coastal areas in which commercial harvests dominate the fisheries, subsistence salmon harvests within the Yukon drainage frequently surpass commercial, sport, and personal use harvests combined. Drift gillnets, set gillnets, fish wheels, and rod and reel are used by fishermen along the river to harvest salmon. Set gillnets are utilized throughout the river, while drift gillnets are used extensively in the state regulated waters of the mouth of the Yukon to a point 18 miles downstream of Galena. Fish wheels are a legal subsistence gear type throughout the river, but because of river conditions and availability of resources to make the wooden structures, are used almost exclusively on the middle and upper Yukon River. Subsistence salmon fishing generally occurs from late May through early October and fishing activities are either based from remote fish camps or from the home villages. 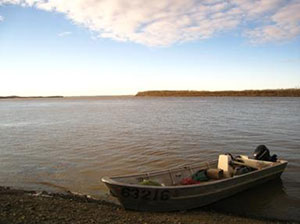 Nonsalmon fish species are an important year-round subsistence resource for Yukon River communities. Nonsalmon fish figure into the subsistence way of life for Yukon area residents in biologically, historically, and culturally significant ways. In 1987 (and reconfirmed in 1993) the Alaska Board of Fisheries (BOF) made a positive customary and traditional use determination for freshwater fish species in the Yukon area, including sheefish, whitefishes, Arctic lampreys, burbot, longnose suckers, Arctic grayling, northern pike and Arctic char. Fish traps were used heavily in the past and today nets and hook and line are the preferred gear types to harvest these types of fish.