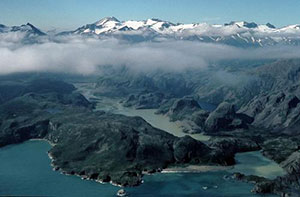 The Alaska Peninsula covers a vast area with numerous rivers and lakes, many which are unnamed. The area is tone of the more beautiful yet remote places to visit in Alaska. Weather can be extreme but the wildlife and fishing are spectacular. All five species of Pacific salmon return to river systems on the Peninsula as do steelhead. Rainbow trout, Dolly Varden, grayling and arctic char may also be found there. The Peninsula is subject to storms from the Bering Sea and the Gulf of Alaska. The area is prone to winds and lengthy periods of rain. Summer time temperatures range from the 40’s to 70’s and down to 10F during the winter months. Ice breaks up in May and forms again in October. April and June are the sunniest months, but at any time of the year be sure to bring rain gear. The fall season is the wettest time of the year. Within the Alaska Peninsula you can also find the Izembek National Wildlife Refuge, which was established to conserve fish, wildlife, and habitats in their natural diversity, and to fulfill treaty obligations to provide the opportunity for continued subsistence uses by local residents.