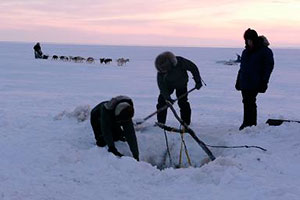 Checking sheefish gillnets set under the ice of Hotham Inlet, about 15 miles northeast of Kotzebue

Most residents in the Kotzebue Sound Fisheries Management Area continue to participate in a mixed subsistence-cash economy, harvesting a variety of wild foods, just as they have done in recent centuries. During the time period 1980 to 2007, community populations in Northwest Alaska increased by 29%, with an estimated population in 2007 of 7,134 people, 3,113 of which (44%) lived in Kotzebue, while 4,001 (56%) lived in one of the 10 smaller communities of the area. Comprehensive subsistence harvest monitoring studies have been conducted in 7 of the 11 Kotzebue Sound area communities. Each community also has been surveyed at least once to develop estimates of big game harvests, and 6 communities had at least 10 years of annual fish harvest estimates. Comprehensive subsistence harvest information from 7 Kotzebue Sound area community studies demonstrated that on average subsistence harvests provided approximately 500 usable pounds wild food per person per year. These same research results indicate that the top 10 species of fish and wildlife harvested by area residents represent 87% of the total subsistence harvest in edible/usable pounds, including caribou (30%), sheefish (13%), chum salmon (12%), bearded seal (“ugruk”)(11%), whitefishes (5%), moose (5%), Dolly Varden (“trout”)(4%), ringed seal (3%), berries (2%), and beluga (“white”) whale (2%). Other than caribou, no single resource contributed more than 13% to the estimated total (e.g., see below based upon Figure 35 from Magdanz et al. 2010). 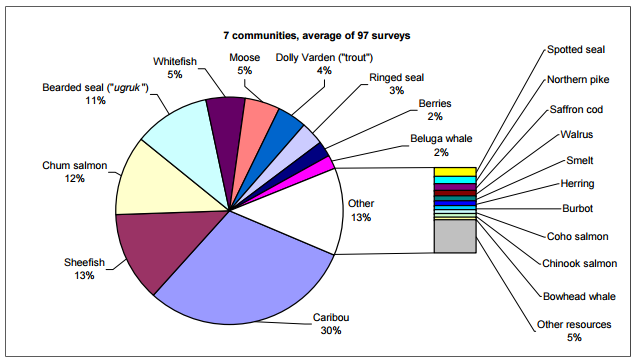