You are here: ADF&G Home » Fishing » Subsistence » By Area » Chignik
Sign in
myADF&G 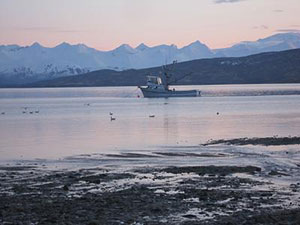 The Chignik Management Area (CMA) is located 450 miles southwest of Anchorage, on the Pacific side of the Alaska Peninsula. It boasts one of Alaska's most pristine maritime settings. The area is part of the Lake and Peninsula Borough, and has four communities: Chignik "Chignik Bay" Chignik Lagoon, Chignik Lake, and Perryville with combined year around population of approximately 375 people (Alaska Department of Labor and Workforce Development, 2009). A fifth community, Ivanof Bay (located west of Perryville) is now occupied only seasonally.

Populations in Chignik Bay and Chignik Lagoon nearly quadruples in size in the summer months due to the influx of Chignik commercial fisherman, employees of fish processing facilities, and local family summer residents. Commercial fishing for salmon, cod and halibut is the main income source for residents of these communities.

The three Chignik communities are within close proximity to each other, though there are no roads that connect them. Perryville is more isolated and situated on the Pacific coast southwest of the Chignik communities. Most of the residents of the five communities of the area trace their ancestry to several Alutiiq (Pacific Yup'ik or "Aleut") communities along the Alaska Peninsula coast with a long and continuous history of their reliance on the numerous local resources for subsistence; for both nutritional and cultural sustenance. The region is rich with salmon and other fish, marine invertebrates, land and sea mammals, waterfowl, plants and berries.