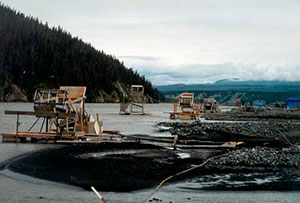 Subsistence salmon fishing in the Glennallen Subdistrict opens June 1 and closes September 30. The Glennallen subdistrict is all waters of the Copper River upstream of the Mcarthy Road Bridge to the confluence with the Slana River. A permit is required, and only one permit will issued to a household in a calendar year. Salmon may be taken with either a dip net or a fish wheel, but only one type of gear can be specified on a permit. Only Alaska residents can participate in this subsistence salmon fishery. Permits can be obtained only at the Anchorage, Palmer, Fairbanks, Delta, and Glennallen offices of the Alaska Department of Fish and Game. Fish wheels must be registered by the fish wheel owner, and must be registered at either the Glennallen or Tok ADF&G offices only. Subsistence salmon permits must be returned to ADF&G no later than October 31. Alaska residents who are interested in participating in this fishery should note that while a fish wheel is an efficient way to harvest salmon there is limited access to good fish wheels sites along the Copper River. Fishwheels may not have more than two baskets and must be removed from the water at the end of the fishing season. They may not be rented or leased or otherwise used for personal gain.

Salmon species available for harvest in the Copper River include:

The upper Susitina River drainage has no anadromous salmon.

Subsistence harvests of non-salmon fish are regulated by a permit issued by the ADF&G area biologists in Glennallen. Bag limits, gear type, and length of fishing period are stipulated on the permit. Permits can be obtained by contacting the Glennallen office of the Alaska Department of Fish and Game. Note that rod and reel cannot be used for subsistence fishing under state regulations.

Non-Salmon fish species available for harvest in the Copper River include: