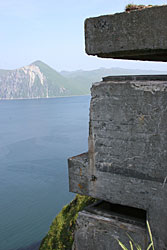 If it seems this community at the start of the western Aleutians has a dual personality, there's a reason. The town of Unalaska is spread across two islands. There's Unalaska Island, where most people here live. Then, there's much smaller Amaknak Island, an islet in Dutch Harbor that is home to the community's extensive industrial port area. The two sides of Unalaska are connected by bridge.

The ferry docks in Dutch Harbor near the north end of Amaknak Island. If you plan to explore on your own, make your first order of business getting a land access permit. The permit gives permission to hike off area roads or to drive on Ballyhoo Mountain or Strawberry Hill, on property owned by the Ounalashka Corp. During weekday working hours, permits may be obtained in town at the Ounalashka Corp. building, 400 Salmon Way; for information, call (907) 581-1276. Permits are also available at the Aleutian World War II National Historic Center, less than a mile from the ferry dock.

Unalaska is a birder's paradise, with more than 100 species, some of them rare and unique to the Chain, including whiskered auklets and ancient murrelets. Red-legged kittiwakes may also be found here. Bald eagles are numerous. Among the country's rarest songbirds, the white-plumaged McKay's buntings may be seen here in fall/winter. (From May through October, a largely white songbird is more likely a snow bunting, since the McKay's buntings stay close to their breeding grounds on the Bering Sea during those months.) 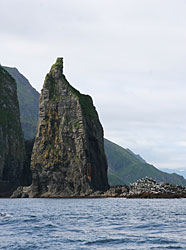 Short-tailed shearwaters are among the area's most common birds and can travel in massive mega-flocks. In 2006, a crabbing boat piloting through early morning darkness in Unalaska Bay was hit with a hail of several hundred dead and dying shearwaters, and area beaches were found littered with more than 1,500 bird carcasses.

Half a mile from the ferry dock, a side road leads to 1,634-foot-high Mount Ballyhoo, site of the Aleutian World War II National Historic Area. Mount Ballyhoo offers a prime vantage point for viewing the area, as well as for up-close views of bald eagle nesting areas.

From Airport Beach Road, trails leading off the main road will take you around the coastline at Bunker Hill. A walk along Bunker Hill trail is rich in bird and other wildlife sightings, including fox, harbor seals, harbor porpoise and numerous seabirds, including gulls, cormorants, marbled murrelets, pigeon guillemots and black oystercatchers. 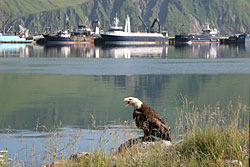 Bald eagles nest on the cliff sides, and on the eastern side of Bunker Hill. In winter, emperor geese may be seen in Unalaska Bay. Look also for tufted and horned puffins, black oystercatchers, red-faced cormorants, mergansers, harlequins and other ducks, as well as pigeon guillemots. If you haven't had enough of eagles, check out the city landfill, on north Unalaska Island. Songbirds include snow bunting, Lapland longspur, redpolls, song sparrow, winter wren, bank swallow, American dipper and the distinctively colorful, delightfully common gray-crowned rosy-finch.

If you will be staying over in Unalaska rather than returning by ferry, consider a trip to Summer Bay, on the western shore of Unalaska Island, to view Steller sea lions, tufted puffins and — just maybe — some whiskered auklets. The whiskered auklet is found in only two places: in an arc from the Aleutians through the Commander Islands, and in the Kuril Islands between the Kamchatka Peninsula and Japan. The birds breed on the rocky islands, and feed on nearby tiderips. At least some stay close by year-round, nesting in August.