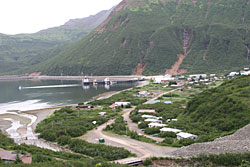 A rugged community built on commercial fishing and subsistence, Chignik is tucked in among a landscape of towering mountainsides and exotic waterfalls. Nearby communities of Chignik Lagoon and Chignik Lake are not yet connected by road.

The brief visit in Chignik afforded by the ferry stop is just long enough for a walk through town. Birding in the brush will turn up a variety of songbirds, including golden-crowned sparrows, yellow warblers and violet-green swallows. These and other bird species may be viewed at ports along the ferry route from here to False Pass: belted kingfisher, black-billed magpie, hermit thrush, robin, winter wren, orange-crowned, yellow and Wilson's warblers, northern waterthrush; savannah, fox and song sparrows, Lapland longspur, and common and hoary redpolls, . Watch for gray-crowned rosy finches and snow buntings along the rocky cliff faces. There's an established population of sea otters in Chignik Bay. 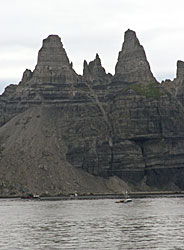 The Chignik Lake area is known for its large salmon run, including Chignik Lagoon's "Castle Cape Reds." Nearby tributaries attract as many as 500 bears at a time in August. Visitors can access both the Alaska Peninsula National Wildlife Refuge and Aniakchak National Monument and Preserve from Chignik Lake.

From Castle Cape to Sand Point, shoreline views are spectacular, ranging from steep rock cliff shorelines and high jagged promontories to waterfalls and green hills. Watch for Veniaminof Volcano on the mainland. Numerous seabird colonies are found in the Mitrofania and Chiachi Island groups. Watch for sea otters near Kupreanof Point.

If you’re traveling this route between October and April, you can often see flocks of wintering waterfowl in the sheltered waters of bays. Common ducks include all three types of scoters, red-breasted and common mergansers, harlequin ducks, common goldeneyes and common, king, and Steller’s eiders. Steller’s eiders are protected as a threatened species under the Endangered Species Act. Emperor geese also winter here, enjoying year-round open water. Other birds to watch for are wintering loons, including the occasional yellow-billed loon.