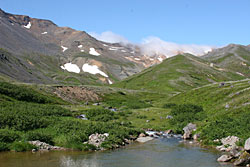 Back on the Alaska Peninsula mainland, King Cove is located on a sand spit fronting Deer Passage and Deer Island, close to the entrance of Cold Bay. King Cove is the site of one of the State's largest and oldest salmon canneries, which draws seabirds in large numbers to shores nearby. As on other parts of the Peninsula, brown bears are abundant. Harbor seals and seabirds of all kinds are common.

Across the bay from King Cove is the community of Cold Bay, which is almost completely surrounded by the nearly 418,000-acre Izembek National Wildlife Refuge. The refuge draws visitors to this remote community from around the world for wildlife photography, hiking and wildlife viewing. 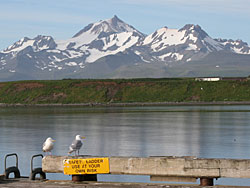 A view of Mt. Frosty from the Cold Bay dock

Expect wind, rain, and fog and possibly snow, and be grateful for the rare clear day. Cold Bay, tucked deep into the bay, is separated from the Bering Sea by only a narrow stretch of land. Therefore, weather here is influenced by storms from both the Bering Sea and North Pacific.

The community offers access to the refuge on 40 miles of gravel road. Naturalists from the U.S. Fish and Wildlife Service will take passengers on a bus tour of the refuge during the stopover, but seats are limited. 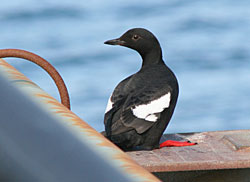 If you’re unaccompanied and time is short, a walk to town may be intimidating. But if you bundle up in layers and raingear, you can watch for the pigeon guillemots and horned puffins that nest under the dock. Listen for their squeals and whistles and watch for them bringing small fish back to their chicks. Many other water birds forage close to the dock, particularly between August and April. Watch for scoters, eiders, long-tailed and harlequin ducks, cormorants, loons, grebes, and kittiwakes. Emperor geese and rock sandpipers forage and roost on nearby beaches. Harbor seals, river otters, and sea otters are common in the northern part of Cold Bay. In 2006, salmon sharks were spotted from the dock.