When you camp, hike, fish or hunt in Alaska you may find yourself far away from villages, towns, and cities. However, being at a distance from civilization does not mean the waters in the ponds, lakes, streams, and rivers are necessarily safe to drink. Some people are able to drink untreated water taken directly from high mountain springs and do so with no ill effect, despite the fact that untreated water is more likely than treated water to contain microbial contaminants (bacteria, viruses, and parasitic protozoa) that can cause illness. Across Alaska, it is safe to assume that various microscopic parasites are present in natural water sources occurring in low-lying areas or where animals or other people also use the water. People who are exposed and sensitive to these unseen “bugs” can have their outdoor experience ruined by illness. Hauling water with you (e.g., on a fly-in trip) can be expensive and tiring, and it is generally unnecessary. Protecting yourself is the best strategy, and it is easily accomplished by using the techniques outlined below. 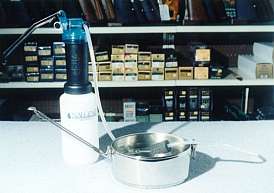 Ready for filtering: Filter attached to receiving bottle. High quality filters will remove 99% of all protozoa and bacteria.

The most common parasite is the tiny single-celled protozoan called Giardia lamblia, or Giardia for short. This parasite lives in the intestines of infected humans or animals, including many common Alaska mammals such as beavers, muskrats, moose, caribou, and deer. Giardia cysts are found on surfaces or in soil, food, or water that has been contaminated by fecal material from infected humans or animals.

You can get giardiasis, sometimes referred to as "beaver fever," by drinking contaminated water or by using utensils that have been washed in contaminated water. Giardiasis can cause variable symptoms in different people, including diarrhea, increased gas, loss of appetite, cramps and bloating. Symptoms may appear a few days to a few weeks after ingesting Giardia, and they may recur intermittently over a period of many months. Giardiasis can be successfully treated with proper medical care. If you experience these symptoms within a few weeks of your trip, ask your doctor to test for it.

The other common parasite is called Cryptosporidium or simply Crypto. Crypto is also a microscopic single-celled protozoan. Symptoms show up in two to four days after exposure; they are very similar to symptoms caused by Giardia except that they may be accompanied by fever and typically last longer than giardiasis. There is currently no effective treatment for cryptosporidiosis, so protecting yourself against these parasites is very important. Both Giardia and Cryptosporidium have been found in surface waters throughout Alaska.

How do you keep from getting Giardia and Crypto? Washing dishes with soap and drying them will not kill these tiny protozoa. Iodine or chlorine added to water will kill Giardia but not Crypto. Boiling water before you use it is the most reliable method to kill Giardia, Crypto and almost any other microscopic organism that can hurt you. If you boil the water for a full three minutes, you will kill any protozoa or viruses the water contains.

However, boiling all your drinking water takes a lot of time and fuel. If you are backpacking or float-hunting and cannot take enough fuel to boil all your water, bring a good quality water filter. Some portable water filters will remove Giardia and other disease-causing organisms. They are a good investment. The best units have a filtering system that screens out the larger organisms and a purifier that chemically destroys the tiniest bacteria and viruses. Make sure your filter will remove Giardia; not all will. Also remember that filters can become ineffective in freezing temperatures or when used with sediment-laden water that hasn’t been allowed to settle for at least an hour. Read and follow the instructions carefully when you use a filter. When in doubt, boil your drinking water to be safe.