When planning your hunt, be aware of possible rules and regulations relating to transporting firearms. State firearm laws and regulations that relate to hunters in Alaska are simple and pragmatic. Carrying hunting rifles and shotguns through Canada is not generally difficult.

In Alaska, hunters may generally possess and use firearms with few restrictions. State law prohibits the following unless you have been issued a Federal permit to possess such a firearm:

Rifles, shotguns and handguns are legal for hunting in Alaska. Rimfire cartridges generally may be used only for small game. See the Alaska Hunting Regulations for details. State law prohibits shooting on, from or across a road. As a matter of safety and courtesy, hunters should not discharge firearms except well away from roads.

Alaska Statute 11.61.220 allows anyone 21 or older, who may legally carry a firearm to also carry it concealed without having to obtain a special permit. The possession of a firearm at courthouses, school yards, bars and domestic violence shelters is prohibited. Firearms carried in vehicles must either be in plain sight or, if concealed, out of reach of vehicle occupants. As a matter of safety, firearms being transported to or from the field should always be unloaded.

There are firearm restrictions in certain state and national park units. For current information about firearms in these areas, contact one of the Alaska Public Lands Information Centers. 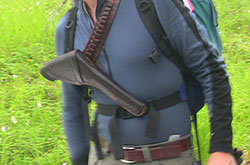 According to the Canadian Firearms Centre, completing the paperwork also allows you to bring in ammunition for that firearm for personal use. Regarding ammunition, there have been many cases worldwide where American travelers arrive at a foreign destination with a single bullet somewhere in their luggage that they didn't realize was there, and they get into trouble. Don't use the same luggage for hunting as you do for other international travel.

The best source for more information on carrying firearms into or through Canada is the Royal Canadian Mounted Police website, or a call to the Canada Firearms Center at 1-800-731-4000; request Extension #9026 if you will be entering Canada at the Alberta border and Extension #9530 if entering from British Columbia.

U.S. citizens may find it helpful to register firearms with U.S. Customs before traveling through Canada in order to prove ownership: https://help.cbp.gov/app/answers/detail/a_id/737/~/u.s.-residents-or-citizens-moving-or-transporting-personal-belongings-through .