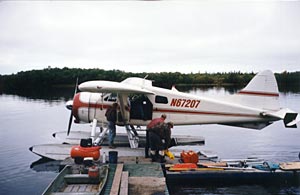 Because of Alaska's large size and limited road system, most nonresidents and many resident hunters, too, hire some sort of transporter to get them to their hunting areas. This is especially true for hunting moose, caribou, deer, and black bear, all of which nonresidents can hunt without a guide.

Alaska has a small number of transporters who will take people into the backcountry on horseback. Somewhat more prevalent are boat operators (mainly in coastal areas) who will provide drop-off transportation. By far, though, the most common type of transporter is the air charter (or air taxi) operator. The air charter operator is licensed by the state to charge for flying hunters and their game meat. A list of licensed transporters is included with the guide list. Similar information is also available in commercial directories.

The Federal Aviation Administration and the State of Alaska must certify all air taxi operators. That certification attests only to minimum competence. Obviously, some pilots are more capable than others. Long-established operators become well known in their areas of operation. You may want to ask the air taxi operator for references.

How much does being flown or otherwise transported in to an area improve your chances of success? It depends on how you personally define “success.” Non-locals in particular need to have a clear understanding about what, for them, constitutes a successful hunt. For some hunters, a new experience with different species in unfamiliar terrain meets the mark. For others, a successful hunt is defined as killing an animal. Generally, flying in or otherwise accessing more remote areas will substantially improve your chances of taking an animal. However, even with the expenditure of many hundreds of dollars for a transporter’s services, taking an animal is not guaranteed. If your definition of hunting success is more experience-oriented than harvest-oriented, a fly-in trip can be a success on many different levels. Flying in is the best way to get a true feel for Alaska's vastness and wild character.

Be advised that thorough hunt planning takes time. For some species like sheep and brown bear allow 12–18 months. For other big game, 6–9 months should give you time to reserve your preferred dates, call references and finalize any contracts you may need. For the non-resident hunter who plans carefully, does the homework on where and what he or she wants to hunt, and makes firm arrangements with an air charter operator, the fly-in hunt can fulfill the dream of a lifetime.

Because air taxi operators spend a lot of time in the air providing services to hundreds of hunters, these service providers are well acquainted with access points and hunting pressure in many locations. There are two ways to go — you can pick a specific site and ask the pilot to take you there, or you can choose a general area and ask the pilot for a good hunting spot within that area.

Although some pilots refuse to take more than one party at a time to a given area, competing air taxis often exist. Even if the competition only flies in one group per area, it may be the case that three or four camps in an area are occupied. Resident hunters with their own aircraft may be hunting in the area as well.

If crowding is of concern to you, let the pilot know. He or she probably has some alternate locations. Some pilots refuse to take more than one party at a time to a given area. Air charters are only as good as their reputations, and those reputations are built on happy clients. One reason an area may be crowded is because game is abundant there. Certainly, there are places where you are unlikely to see another hunter, but game may be scarce. Again, your choice of areas will depend on your definition of success.

Unless prior arrangements are made with air taxi operators, the drop-off hunter is picked up from the same point at which he or she was originally dropped off. The smart hunter makes firm arrangements to have the pilot check on him or her every few days. Remember, if you decide to move your camp, additional flying costs will apply.

You need to know the payload capacity of the particular aircraft you are using. Example: You are told the aircraft has a payload capacity of 1,200 pounds. Say each fully dressed hunter weighs an average of 200 pounds. There are three hunters and the pilot: 800 pounds. Therefore, each hunter can carry 130 pounds of gear, including guns, food, clothing, camping equipment, etc. This does not include meat and antlers you might bring out.

Avoid the temptation to overload an aircraft just to get everything out in one trip. Overloaded aircraft are a significant cause of hunting-related crashes. Over-limit payloads are not only dangerous, they are illegal.

Costs and Services: Be Clear 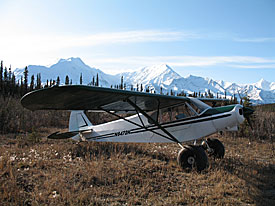 The drop-off hunt is less expensive than a guided or outfitted hunt. This is because, although the transporter takes care of transportation and may throw in some planning tips, the hunter performs all other functions on his or her own. Before you contract with an air charter operator, you should have a clear understanding of the costs of services and know exactly which services to expect. Prices and services vary considerably. To avoid confusion and disagreements, ask specific questions about the charges and what services are included.

The cost of a fly-in hunt depends on the number of hunters, the amount of equipment and supplies, the type of aircraft and the distance. Some air taxis offering drop-off hunts charge by the hour; others offer a flat rate. Under state law, air taxi operators must publish their hourly charter rates. The rates should be posted in their office; if they are not, air taxi operators are required to tell you the rates if you ask. By knowing the hourly rate, the distance and flying time, you can calculate whether the flat rate is reasonable.

When calculating costs on an hourly rate, you must account for “dead-head” time, the time the pilot spends flying back to base after dropping you off and the time spent flying out to pick you up. As an example, if you are quoted a price of $250 per hour and the area you wish to hunt is approximately an hour from the charter operator’s home base, you will pay about $1,000 for being dropped off and picked-up. Remember, you are chartering the entire plane, and more than one hunter may be able to share the ride and split costs. If you and a friend hunt together, the cost in this example would then be $500 per person. However, if you both take caribou or moose, you may need an extra trip to get the meat out. If you have contracted by the hour, the costs can mount up quickly.

Air charter operators often offer "package" or "flat rate" deals. In the package or flat rate system, you pay a single fee per person. If you accept a flat rate, ask the pilot if it includes some time scouting the hunt area. Most hunters like to look at the terrain from the air and perhaps spot game before landing. Generally, other than on regularly scheduled commercial airlines, you may not take big game on the same day you have flown (see the regulations for species and seasonal exceptions).

Be sure to also ask whether the package includes flying out the meat and antlers. Package and flat rate fares are a bit of a gamble for the operator and the hunter. The operator comes out ahead if the game is nearby or if you are unsuccessful. On the other hand, the hunter tends to find flat rates a good deal when the animals are farther away than expected or if he or she is successful. Some package deals also include being checked on at least once during the hunt to bring out game or move you if you haven’t been successful.

Meat Care is Your Responsibility

If you have made arrangements with the pilot to check on you every few days, it may be possible for him or her to fly out your meat early. If the pilot is on the way home from some other trip, you may be able to save some money. Cost is only one consideration relating to game meat, however.

Most air taxis have access to some sort of meat storage facilities. By having the pilot check on you periodically, you can get your meat out of the field before it spoils. It is the legal responsibility of the hunter—not the transporter—to salvage all edible meat and/or hides and skulls as outlined in the regulations booklet. For more information, see Meat Care. Make sure you have a pre-arranged signal so the pilot clearly understands whether you want him or her to land at your location to move your camp or haul out meat.

When planning your hunt, keep the weather in mind. Besides making your hunting miserable, poor weather may disrupt your flying plans. Allow time on both ends of your schedule for potential weather disruptions; how much time depends on the normal frequency of bad weather for the area at that time of year.

If a delay in your pickup will cause a major inconvenience, schedule your pickup a day or two earlier – or don’t go on the hunt. Similarly, don't even think about pressuring a pilot who thinks the weather is not good enough. Being on time is not worth the risk of dying. Think of it this way: is your boss or family going to be more inconvenienced by you being a day or two late, or by you getting killed?

Note: If you are not an experienced Alaskan pilot, you should not consider using your own plane for hunting in Alaska. Alaska’s weather is frequently bad during the prime hunting seasons — strong winds, heavy rain, snow, and fog are common in most areas. Also, many landing strips are small, shallow lakes or simply a short area temporarily cleared of enough brush to land a “bush” plane. Don’t risk it.