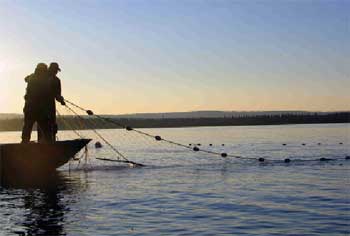 Subsistence fishers check their nets near Koyukuk. ADF&G relies on collaborative projects with local communities for the collection of tissue samples. The collaborative partnership between ADF&G and stakeholders is essential to the cutting-edge management tool that this project provides.

The number of Chinook salmon required to migrate up the Yukon River into Canada has been set by the Yukon River Salmon Agreement between the United States (U.S.) and Canada. Estimates of the proportion of fish originating from Canadian streams are of high importance in the management of Alaska’s Chinook salmon harvests in the Yukon River. A run consists of two components. One component is harvested by commercial and subsistence fisheries and a second component is allowed to escape the fisheries into streams and rivers and to migrate into Canadian waters.

Since 2004, the Alaska Department of Fish and Game’s Genetic Conservation Laboratory (GCL) has used molecular markers, called single nucleotide polymorphisms (SNPs), and mixed stock analysis (MSA) to assign the stock origins of Chinook salmon caught in Alaska’s Yukon River fisheries. These estimates are then used to manage harvest and escapement goals, and to ensure that the required number of fish return to Canada. 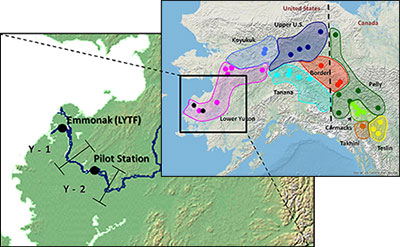 Fisheries in the lower Yukon River have been sampled in-season since 2008. Samples typically come from the ADF&G test fisheries at Emmonak and Pilot Station (Figure 3). These test fisheries are designed to assess the strength of the Chinook salmon run, and stock composition estimates give an indication of the size of the run of upriver stocks, especially those bound for Canada. The Chinook salmon runs through the lower Yukon River typically occur in pulses, with the early pulses having the largest numbers of fish homing to Canada.

Test fishery samples are flown to Anchorage for laboratory and statistical analyses. Estimates of stock composition are made available to fishery managers within 32 hours after the samples arrive at the GCL.