Living with Wildlife in Anchorage:
A Cooperative Planning Effort
Chapter 2: The Planning Process

This chapter describes the effort and ideas involved in developing this plan. It begins with a brief history of the plan, and describes the major steps in the process. It also includes a list of participating agencies and interest groups, and reviews how the public was invited to participate in the process. Finally, it provides a list of “planning principles” that were used to guide decision-making in the plan.

A Chronology of the Planning Effort

Steps in the Process

The planning effort followed a standard comprehensive planning process. The basic steps were to: 1) review issues; 2) collect information about issues; 3) develop goals and objectives; 4) develop actions that could be used to meet goals and objectives; and 5) choose among these alternative actions. By calling them steps, this process implies tasks were approached serially; however, the planning team revised goals, objectives, and alternatives throughout the process. A brief discussion of these steps is given below.

Issues. “Scoping” and the development of a list of issues was the starting point for the plan. These were developed by the planning team but included input from public meetings held in fall of 1997 and February 1998. The list of issues is provided in Chapter 4.

Goals and objectives. These are broad, qualitative statements about what managers are trying to accomplish in the plan. Goals attempt to reflect broad public values toward wildlife and the environment, while objectives are more concrete. The planning team spent considerable time on this step through the winter of 1997-98 so they could be included in the goals and objectives of the Anchorage Municipality Comprehensive Plan. Information from the February 1998 public meeting and the survey of residents was useful during this step. Chapter 3 presents the goals and objectives for the plan.

Indicators/standards. This step involves choosing measurable variables to define and give meaning to the qualitative objectives above. Indicators and standards define healthy population ranges for different species, and establish tolerance thresholds for wildlife conflicts. The planning team implicitly developed these throughout the process, but explicitly defined them in the Public Review Draft. Information from the survey of residents and the public meeting/open house in January 1999 was useful for this step. Indicators and standards are presented in Chapter 4 on the state of wildlife in Anchorage.

Developing and prioritizing alternatives. The bulk of the planning effort in the past eight months has focused on brainstorming actions that could be used to meet the goals, objectives, and standards in the plan. Much of this work was done in planning team meetings, but included consideration of survey results and information from the public meeting/open house held in January 1998. The list and description of actions are the heart of the plan, and are presented in Chapters 5 and 6.

Draft and final plans. A Public Review Draft was developed in the spring of 1999 and was also summarized in a newsletter. As with any draft plan, the goals, objectives, standards, and actions in the plan were considered proposals, and the planning team received considerable public comment about them throughout the summer of 1999. Several revisions in the plan were based in part on those comments, and are discussed in sections of this Final Plan, which was prepared in August-September 1999.

The following lists the agencies and interest groups that participated in the planning effort. The list includes primary contacts for each agency. 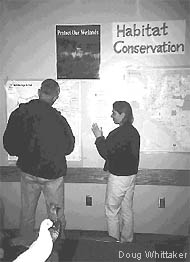 The public was invited to comment on the plan throughout the process. (Open House to brainstorm planactions at Fairview Recreation Center, January 1999)

Interest groups and the public had a number of opportunities to assist in developing the plan. Public involvement was essentially built into the process along three tracks.

First, the planning team was developed with representatives from several agencies or interest groups with wildlife responsibilities. While certain groups chose not to participate to a significant degree, they were kept informed throughout the process via summaries of planning team meetings. This collaborative process provided excellent opportunities for diverse voices in the community to express their views and shape the plan.

Finally, values and attitudes of the general public were assessed through a scientific survey of residents (Whittaker and Manfredo, 1997). This survey was initiated in the beginning of the process, but anticipated a number of issues in the plan. A summary of the survey results is available from ADF&G.

The public was invited to comment on the plan throughout the process. (Open House to brainstorm plan actions at Fairview Recreation Center, January, 1999.)

In developing the plan and preparing this document, the planning team was asked to consider a number of “planning principles,” listed below. The intent was to design a process appropriate to the need for a collaborative, integrated vision for Anchorage wildlife management. These “principles” helped define content needed in the plan, and encouraged an informal but effective decision-making environment.

The plan must be clear and understandable; the general public is the target audience. The public is largely unimpressed by planning efforts. They often view planning as a ritualistic exercise that rubber-stamps decisions that have already been made, or as a long, drawn-out process that keeps bureaucrats employed writing unreadable documents. To combat this problem, the plan should be as accessible as possible with explicit statements about what government agencies would like to do and why.

Recognition that the plan will be non-binding, but important. As a plan that addresses the authorities and interests of several agencies and groups, we recognize that complete agreement is unlikely and that no agency will be able to commit to every idea in the plan. Accordingly, the plan is not designed to be legally binding. However, agencies should not underestimate the power of this kind of “vision plan.” In developing this plan, agencies are committing to seriously consider and utilize this plan in the making more detailed plans or other decisions relevant to their Anchorage wildlife management responsibilities.

Recognition of a limited planning time horizon (about ten years). Plans are based on snapshots of information and reflect the interests and priorities of the time in which they are developed. The goal is to anticipate future issues and resources, but the ability to accurately predict is always limited. Accordingly, the plan should generally consider a ten-year planning horizon. If new information or circumstances create the need to revise decisions in the plan during the ten year period, amendments to the plan offer an explicit way for agencies to re-think positions and actions.

Recognition of differences between “now” decisions, and intentions. Plans can have many different types of decisions. Some are “now” decisions designed for immediate implementation (e.g., policies on how to deal with wildlife conflicts). Others are “intentions” — what government should do if funding or other resources became available. The key to good planning is to recognize and clearly identify which kind of decisions are being made.

The goal is to make decisions, even on controversial issues. A fault of many plans is that they only get agreement on the “easy” decisions. However, there is little point in planning only to satisfy the “lowest common denominator.” Accordingly, the goal is to push the team as far as it can go on every decision.

If the planning team can't reach consensus on a decision, a deferred decision is acceptable. In some cases, consensus may not be possible. In these cases, we will not use a majority vote to make a decision that will not be generally supported by all agencies. In these cases, our obligation is to document the points of disagreement and defer the decision; we will also offer a specific process, timeline, and lead agency for tackling these issues in the future.

Recognition of complexity and diversity in developing urban wildlife plans. Urban wildlife plans are usually more complex than those for rural or wildland areas. In this plan, decisions will address multiple species, issues, interests, and agencies.

Recognition that Anchorage is likely to continue growing in both population and development levels. Anchorage has grown dramatically in the past three decades, and indicators suggest the city will continue to increase in population and development levels in the foreseeable future. The issue in this and other natural resource plans is to manage that growth so it does not diminish the characteristics, function, and benefits of the resources (e.g., wildlife and open space) that enhance the quality of life for residents and visitors.

Recognition of the limitations of managing wildlife in urban areas. Urban wildlife plans are challenging because most of the land is not in public ownership, and lands that are public are managed for a variety of specific purposes that may or may not be compatible with wildlife goals. Many actions will need to include education/regulation options in addition to direct actions that can be contemplated for public lands.

Recognition that cities are essentially “non-natural” areas. Urban areas are modified environments — there is little sense in thinking they can be managed to provide the full diversity of “natural” ecosystems. More importantly, plan choices may often need to be based on social values toward various species and habitat types, not full ecological potential. These decisions require both social and biological information.

Distinction between representing interest groups/agencies and representing the interests of the greater Anchorage public. Each planning team member represents an agency/group and will be expected to represent that agency at certain times in the process. However, there are other times when team members should remove their “agency hat” and put on a “community hat.” Wildlife do not respect land ownership boundaries, and there is good evidence that the public is unconcerned about the fine line of agency jurisdictions. The goal in this effort is sound, integrated wildlife management for Anchorage; this is more likely with a focus on the larger picture.