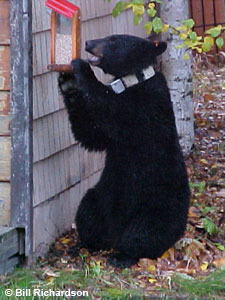 The Municipality of Anchorage is Alaska's largest city. Its human population numbers about 280,000 in 2008, about 40% of the state's population. Residents also include 250–350 American black bears and 55–65 brown (aka grizzly) bears.

The municipality encompasses 1,958 mi2, including a large state park (773 mi2), two military reservations (118 mi2), a portion of Chugach National Forest (430 mi2), other lands managed by federal agencies (378 mi2), and a large state wildlife refuge. The area occupied by humans is only about 204 mi2 (10.4%) of the total municipality; thus, the city is surrounded on all sides by bear habitat.

Anchorage's metropolitan area also includes several large city parks that are chiefly natural, wooded habitat and is bisected by greenbelts along streams, many of which have spawning salmon from May through November. The municipality's suburbs — Eagle River, Chugiak, Eklutna Village, Rainbow, Bird, Indian and Girdwood — are scattered homes and subdivisions along road corridors. Only Eagle River and Girdwood have small "downtown" areas.

Thus, both black bears and brown bears are found in proximity to developed areas, drawn primarily by natural foods. When some of the black bears learn to eat garbage, pet and livestock foods, and bird seed, or some of the brown bears routinely fish or chase moose calves near homes, trails, and sport fishing streams, the public interacts with them daily. Most Anchorage residents appreciate, or at least tolerate, bears in the city, but it's in the best interest of the public and bears to minimize the potential for maulings.