Adaptive Resolution Imaging Sonar (ARIS) is used at river 14 on the lower Kenai River to estimate passage of king salmon 34 inches (75cm) or longer in length entering the river. The sonar site was chosen for its bathymetric, or river contours, qualities which allow the sonar technology to cover the entire span of the river. The sonar is located just above tidal influence which allows more complete bank-to-bank coverage and ensures fish are migrating upstream. Software allows biologists and technicians to measure fish in the ensonified zone to estimate the number of fish 34 inches (75cm) or longer. By only estimating large fish, the estimates are less likely to be corrupted by presence of other species such as red (sockeye) and pink salmon. The goal of this project is to produce daily estimates of net upstream passage of fish 75cm or longer for both early and late runs. Data collected from the sonar are critical for effective inseason management of Kenai River king salmon. 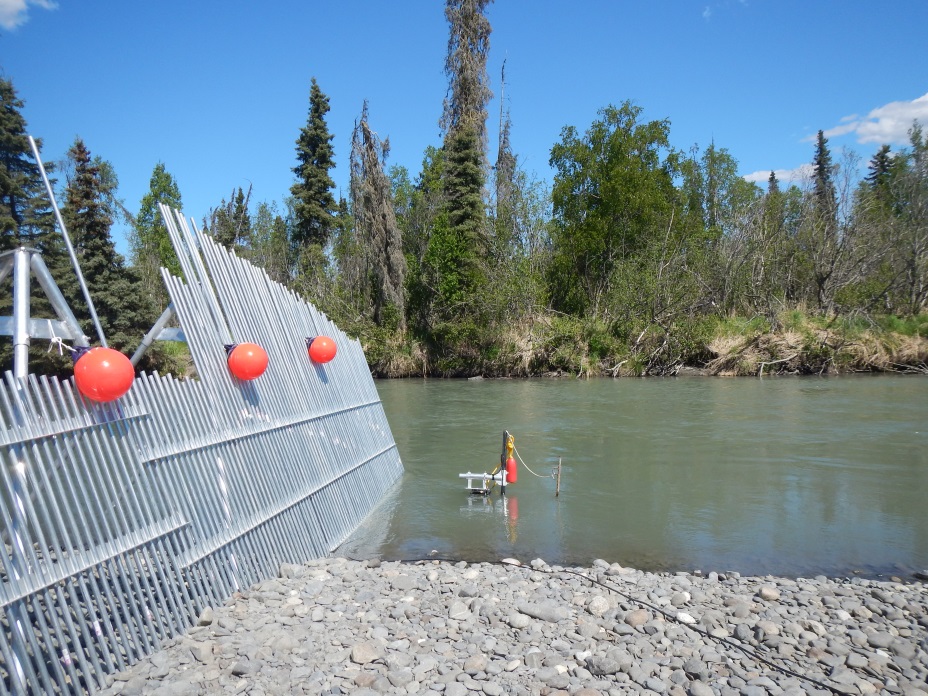 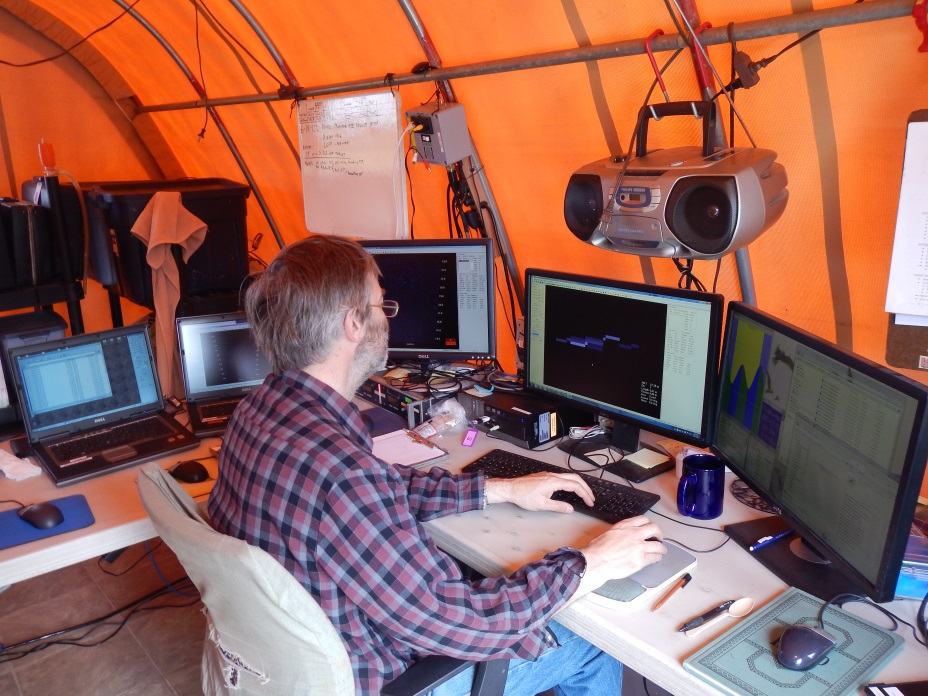 More about the Kenai River Sonar 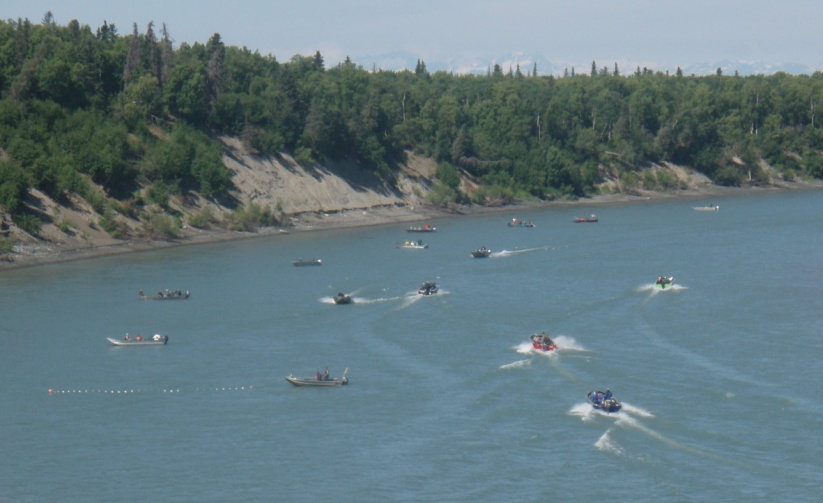 Netting often occurs during crowded conditions. Anglers are asked to please yield to, and give a wide berth to, the ADF&G gillnet and boat

Standardized gillnetting occurs daily from May 16 until the sonar is discontinued or through August 20 at river mile 9 in the estuary area of the Kenai River. Sampling is scheduled around the tide cycles. 60-foot gillnets are drifted downstream with the current to capture upstream migrating salmon. Gillnets of two different mesh sizes (4.0 inch and 7.5 inch stretched mesh) are used to reduce selectivity of the size and species of fish caught. Once caught, captured king salmon are untangled and remain in the water while they are placed in a padded cradle attached to the outside of the boat. Each fish is then sampled for biological data and released to continue their upstream migration. In past years some king salmon were tagged with a radio transmitter (see section on radio telemetry below). Goals of this project are to estimate the age, sex, and length compositions of returning king salmon for both the early and late runs, and to estimate the daily species composition (king salmon vs other Pacific salmon species) and daily catch rates or CPUE (catch per unit of effort) of king salmon. Data collected from the inriver gillnetting program are critical for effective inseason management of Kenai River king salmon. 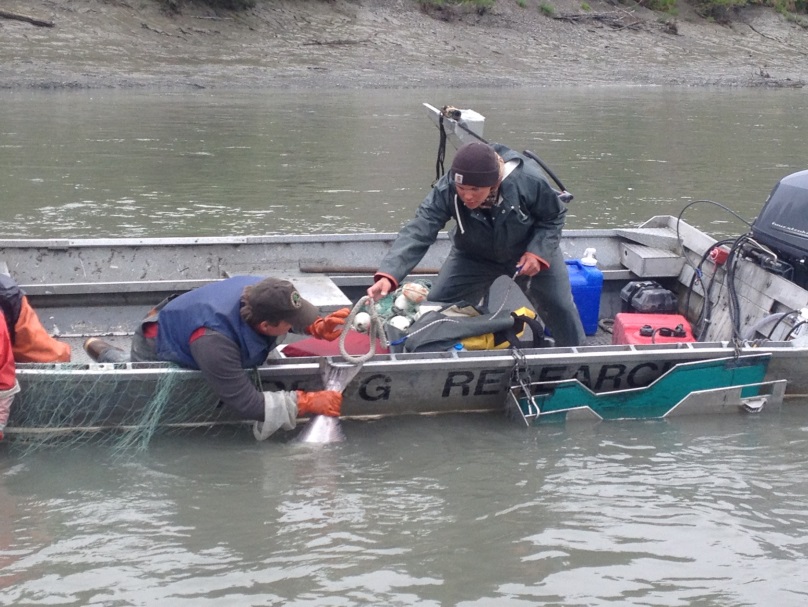 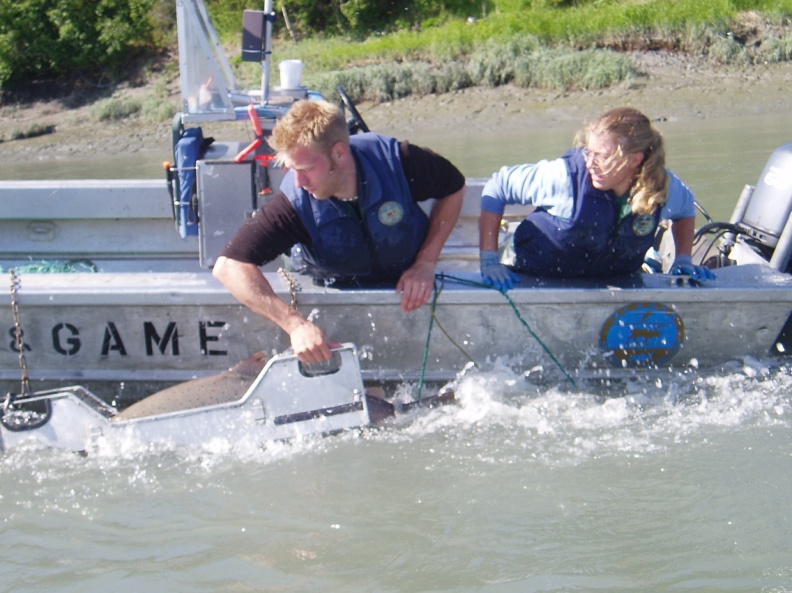 A king salmon is loaded into the sampling cradle 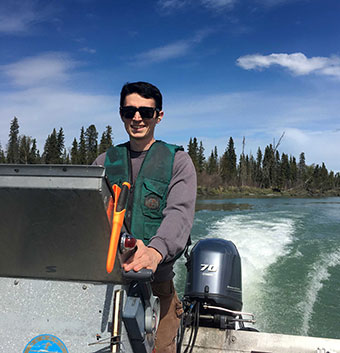 An onsite creel survey of anglers has been conducted on the lower Kenai River during king salmon season since 1977. The primary goals of the creel survey are to estimate the number of king salmon both caught and those retained by the sport fishery downstream of the Soldotna Bridge to the Warren Ames Bridge. Anglers are also interviewed for catch and harvest rate information as they exit the fishery. Harvested king salmon are sampled for biological data including age (scale sample), sex, length, and genetic tissue (axillary process). Data collected from the creel survey are critical for effective inseason management of Kenai River king salmon. 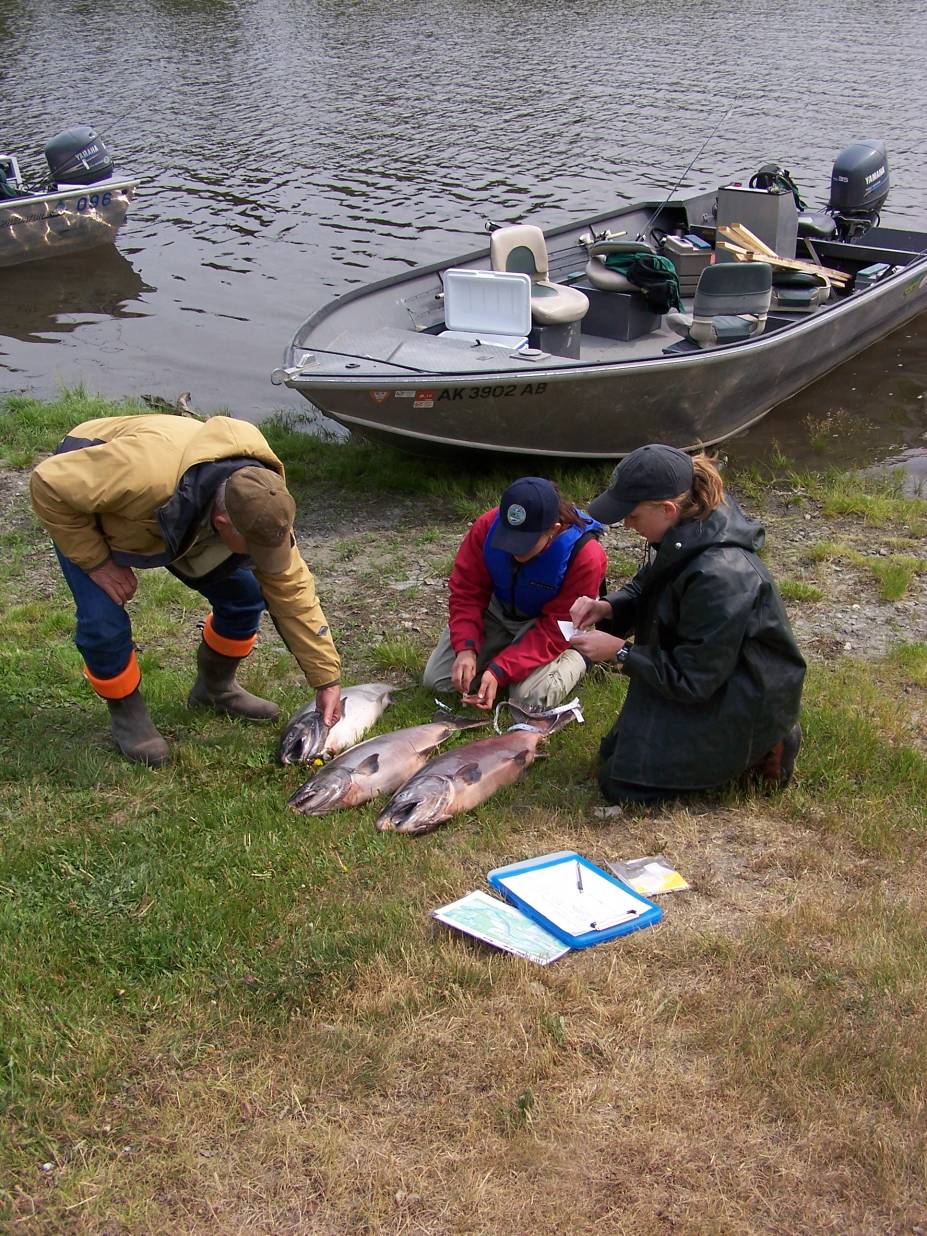 Kenai River king salmon were radio-tagged from 2010 to 2016. Early-run king salmon were tagged from 2010-2016, while late-run king salmon were tagged from 2012-2014. Esophageal implant radio transmitters were inserted into some king salmon captured at the river mile 9 inriver gillnetting project and released to continue their migration. Radiotagged fish were monitored both passively, using a network of stationary radio receiving stations, and actively, by foot, boat, or aerial surveys. Stationary receiving stations allowed 24-hour monitoring of radiotagged king salmon at key points along their migration routes whereas active tracking was used to determine times at specific locations. This system provided multiple, redundant locations for each tagged fish with resolution sufficient to detect noteworthy behavior patterns. 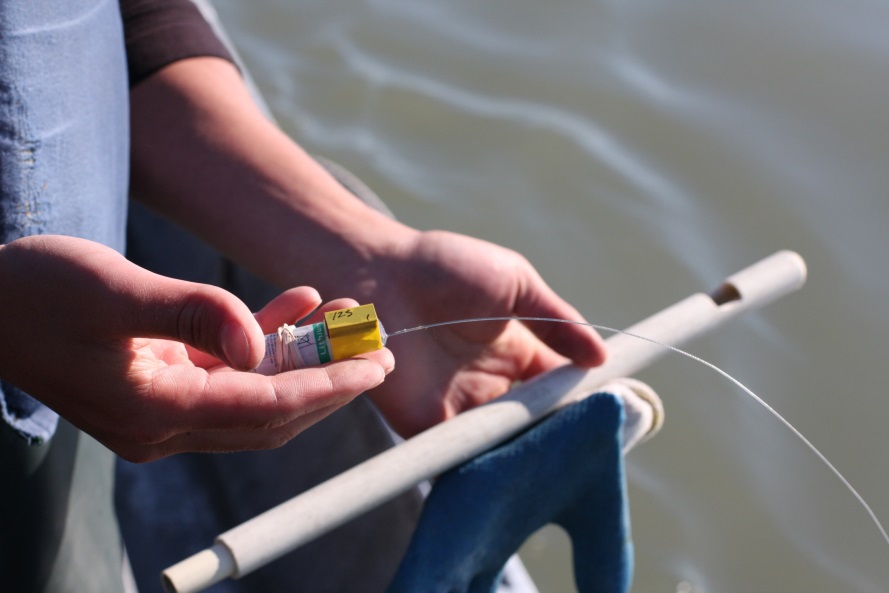 Radiotagged king salmon with a spawning destination in the Killey River drainage (including Benjamin Creek) were the largest component of the early run in all datasets. Mainstem spawners and Funny River spawners were the second and third largest contributors of the early run. The spawning contribution of all other tributary spawners was minor. Mainstem spawners made up 15% to 28% and averaged 21% of the early run. For mainstem spawners, the area downstream of the Soldotna Bridge had the greatest number and density of radiotagged fish every year (38%), followed by the area between Moose River confluence and Skilak Lake outlet (average 28%), Soldotna Bridge to Moose River confluence (average 22%), and lastly Skilak Lake inlet to Kenai Lake outlet (average 12%). 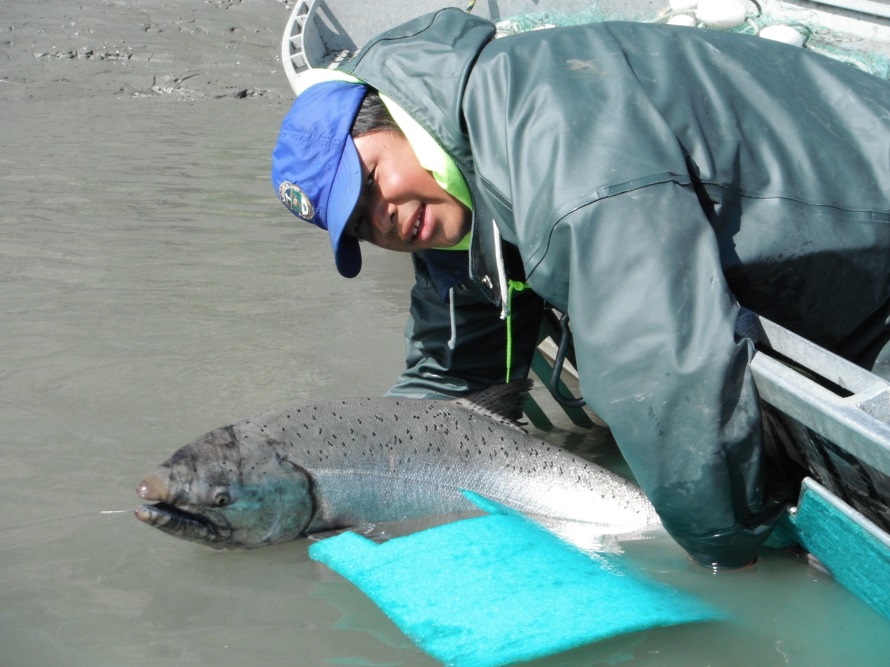 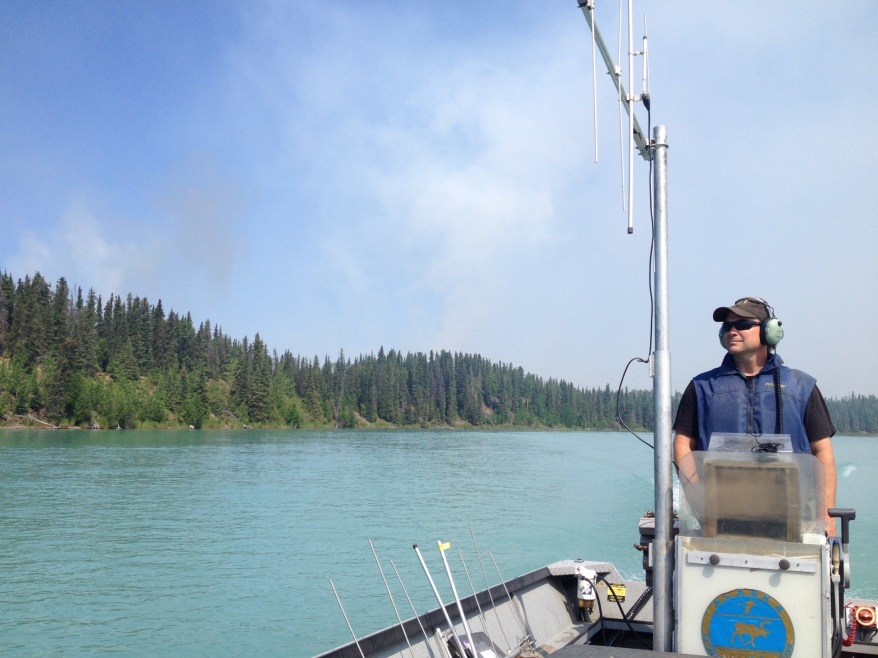 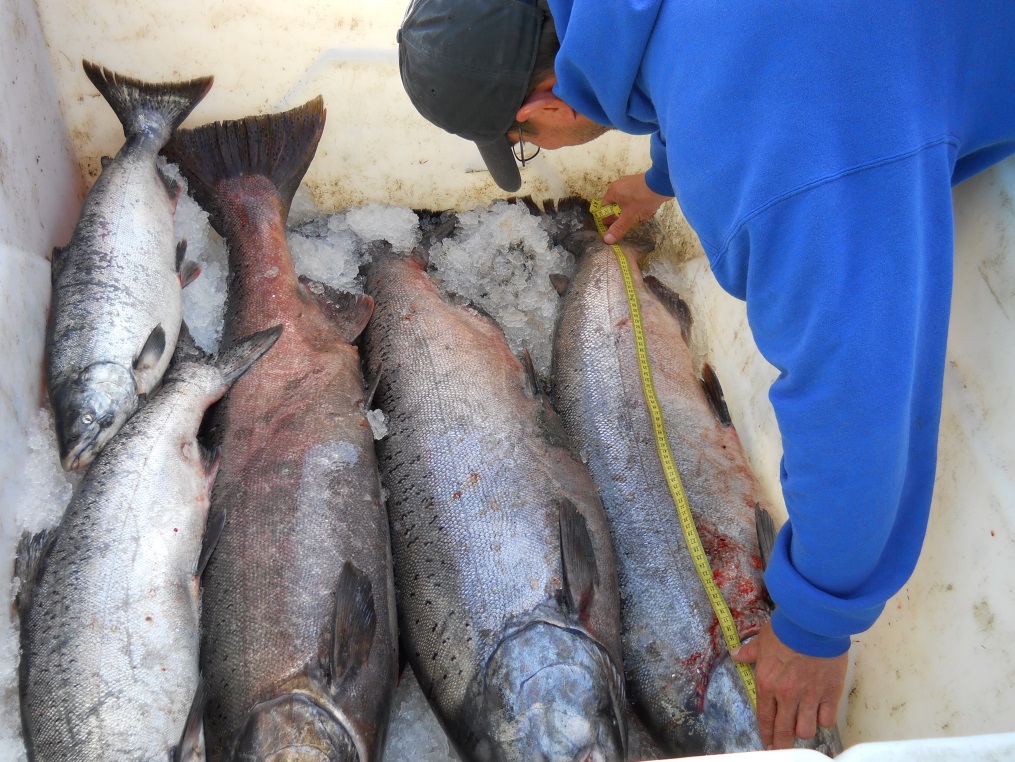 King salmon harvested in the late-run eastside set gillnet (ESSN) commercial fishery in Upper Cook Inlet are sampled by department technicians for genetic analysis by clipping off the axillary process, a small fin beneath the pelvic fin of the fish. Samples are taken throughout the entire commercial fishing season and from all fishing districts. Age, sex, and length composition data are also collected. The goals of this project are to estimate the king salmon stock composition of the harvest and to estimate the age composition of king salmon harvested. Data collected from the ESSN commercial king salmon harvest is not used for inseason management, however aids in estimating the total annual run of late-run king salmon to the Kenai River. Estimating the total run, provides the data necessary to review the escapement goal and forecast Kenai River late-run king salmon. Results show that Kenai River mainstem spawning fish compose most of the harvest every year, averaging 71% of the total harvest. Kasilof River mainstem spawning fish compose nearly all the remainder of the harvest. 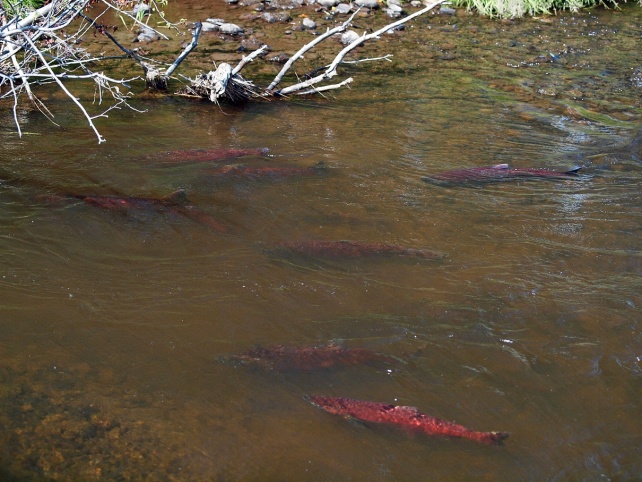 Escapement monitoring for both naturally-produced and hatchery-produced king salmon occurs daily at a department weir using a digital video recording (DVR) system, an underwater camera, and a passage chute. Fish are either allowed unobstructed passage upstream through the facility or collected for use as brood stock (see below). From recorded video, each fish is observed for marking status (presence or absence of an adipose finclip) and counted. Twice weekly, fish are trapped and sampled for marking status, sex, length, and a scale sample is collected for determining the age of the fish. 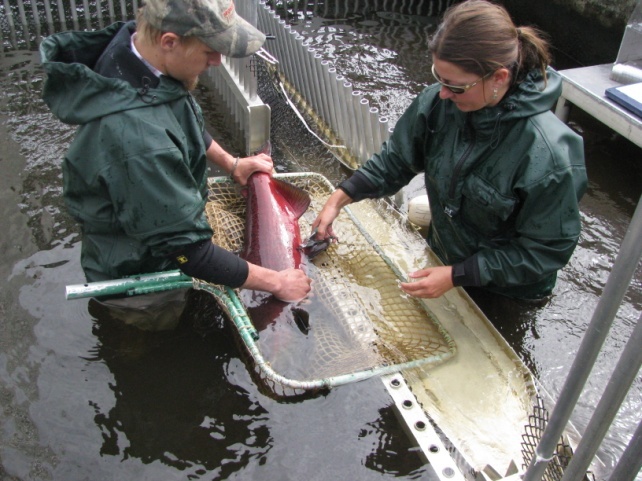 Concerns about Crooked Creek king salmon straying to other freshwater streams have resulted in decreased stocking levels. 1. Approximately 140,000 - 145,000 king salmon smolt are stocked into Crooked Creek annually. These fish are reared at the William Jack Hernandez Sport Fish Hatchery located in Anchorage, and delivered to the Crooked Creek Facility the first week of June where they are held in raceways for imprinting, usually for a minimum of 7 days. 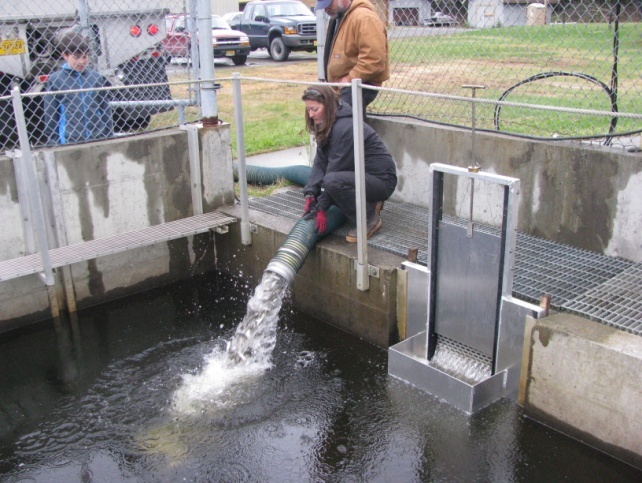 On sampling or brood stock collection days, king salmon are trapped and checked for sexual maturity. If fish are thought to be sexually mature, they are passed to a concrete raceway where they are held, and later, artificially spawned during an "egg take" when many fish are artificially spawned on the same day. Fish that are not mature enough or are too mature are counted and passed upstream, allowing them to spawn naturally. Eggs and milt (gametes) collected during the egg take are transported to the William Jack Hernandez Sport Fish Hatchery where they are fertilized, incubated and reared. Only progeny from naturally-produced king salmon are then stocked back into Crooked Creek the following year. 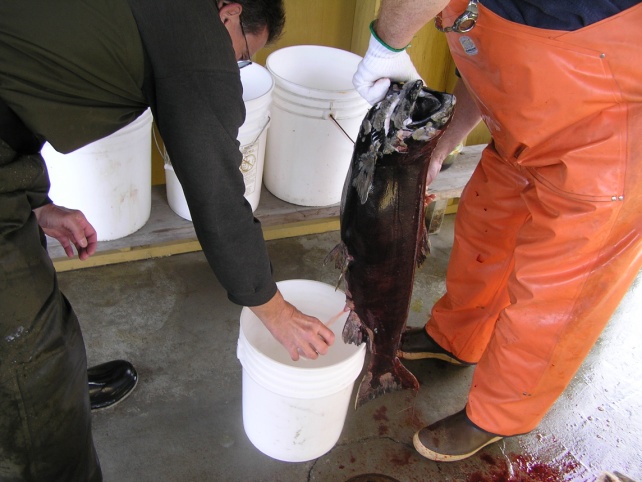 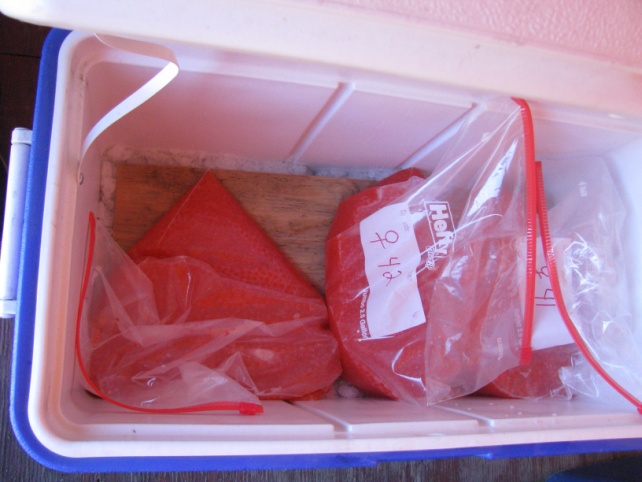 For more information, see the Publications by Gates, Cope, Reimer, Pawluk, and Begich.

The Russian River originates in the Kenai Mountains on the Kenai Peninsula and drains into the upper Kenai River between Kenai and Skilak lakes. The Russian River red (sockeye) salmon escapement study is the most long-standing research program in this area. A counting tower was first established in 1963. A weir has been operated at the outlet of Lower Russian Lake annually since 1969. The weir is used to census the spawning escapements of red salmon and count other salmon (silvers (coho) and kings) that utilize the upper reaches of the drainage to spawn. Clear water and low water depth in the Russian River make it easy to identify salmon species as they pass through the weir. Biological samples (age, sex, and length) of red salmon are also collected at the weir. In addition, weir personnel collect climatological and river discharge data, operate the Russian River fish pass when necessary, and conduct stream surveys to enumerate, or count, spawning salmon downstream of the weir. 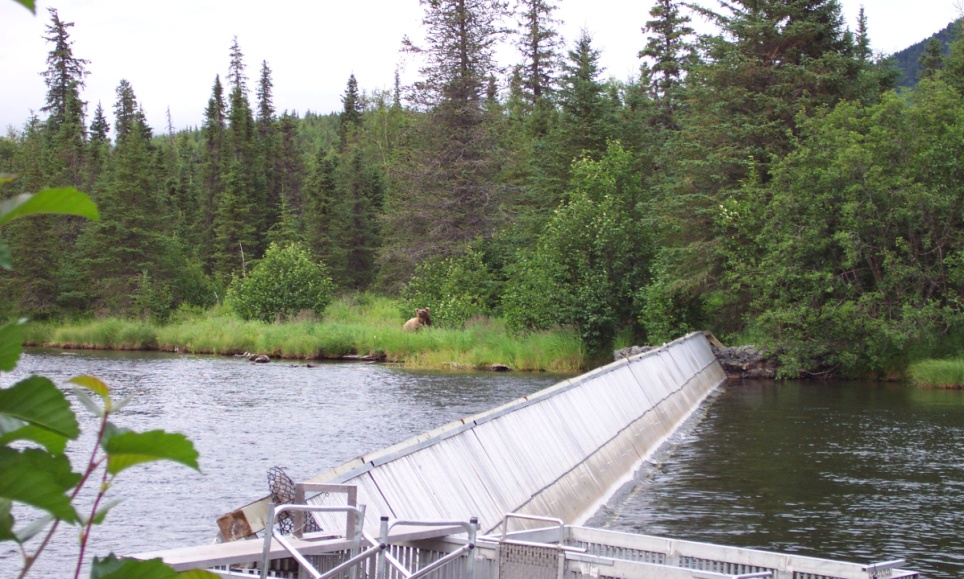 The Russian River weir near the outlet of Lower Russian Lake 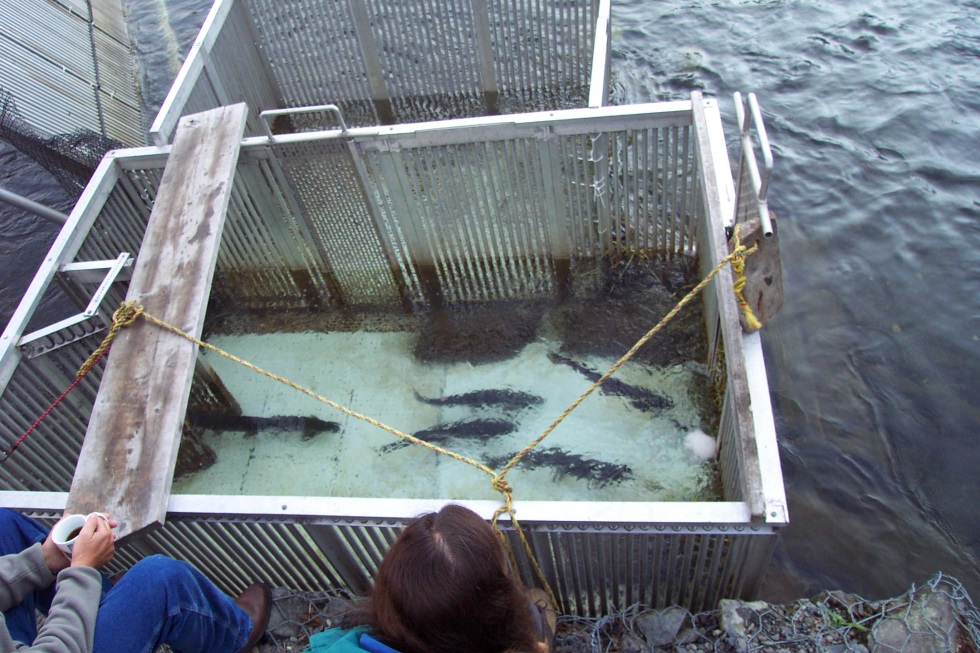 For more information, see the Publications by Lipka, Gates, and Simons.

The Northern Kenai Peninsula Management Area oversees a northern pike control program that has existed for nearly 20 years. Northern pike are an invasive species in Southcentral Alaska and can harm native fish populations such as juvenile salmon, and resident species, particularly where habitat utilization between the species overlaps (i.e. calm, relatively shallow and weedy habitat). Initial efforts mostly utilized gillnetting to define northern pike distribution and to reduce select populations. By 2008 Alaska Department of Fish & Game (ADF&G) began using rotenone, a plant-based piscicide, a toxin specific to animals that breathe though gills, to remove northern pike. An important aspect to the northern pike removal program is to restore native fish species to waters after the northern pike are removed. Examples where native fish are being restored following the removal of northern pike include Stormy Lake (Swanson River Drainage) and the Mackey Lake system within the Soldotna Creek Drainage and former pike-invaded lakes in the Tote Road area south of Soldotna. 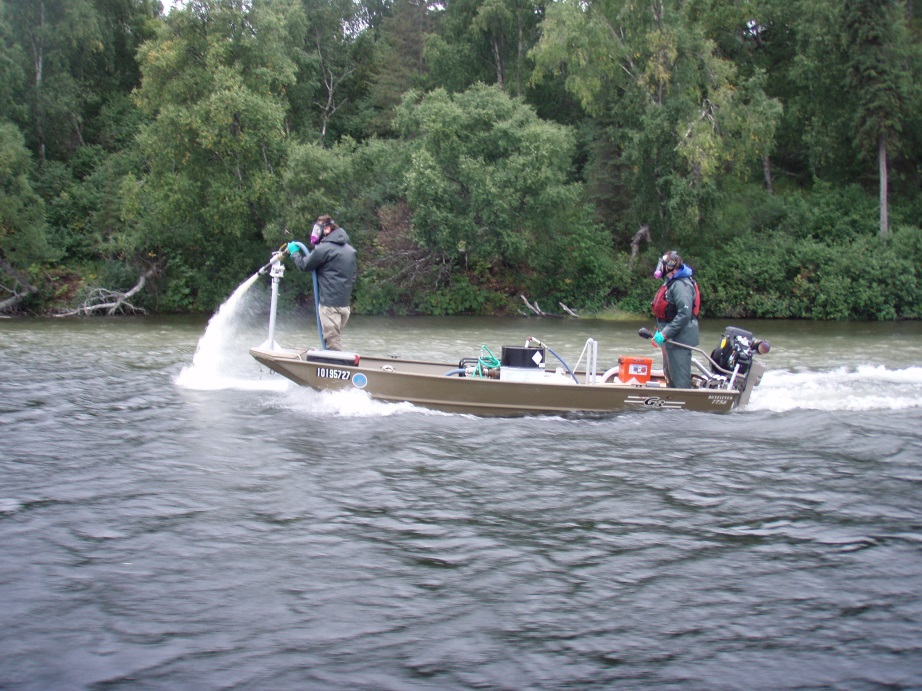 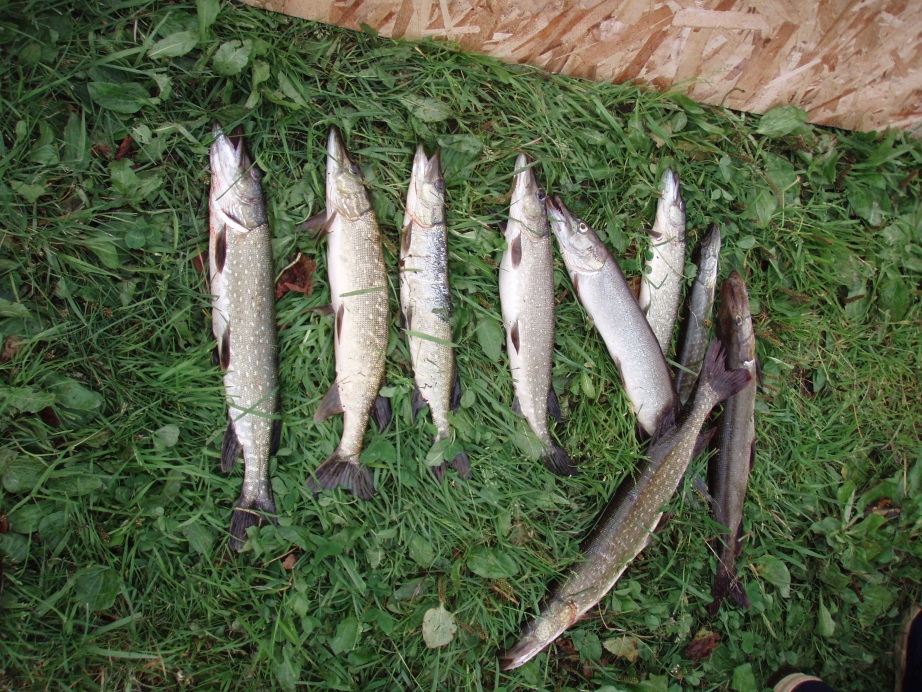 For more information, see the Publications by Massengill, Dunker, McKinley, and Begich. 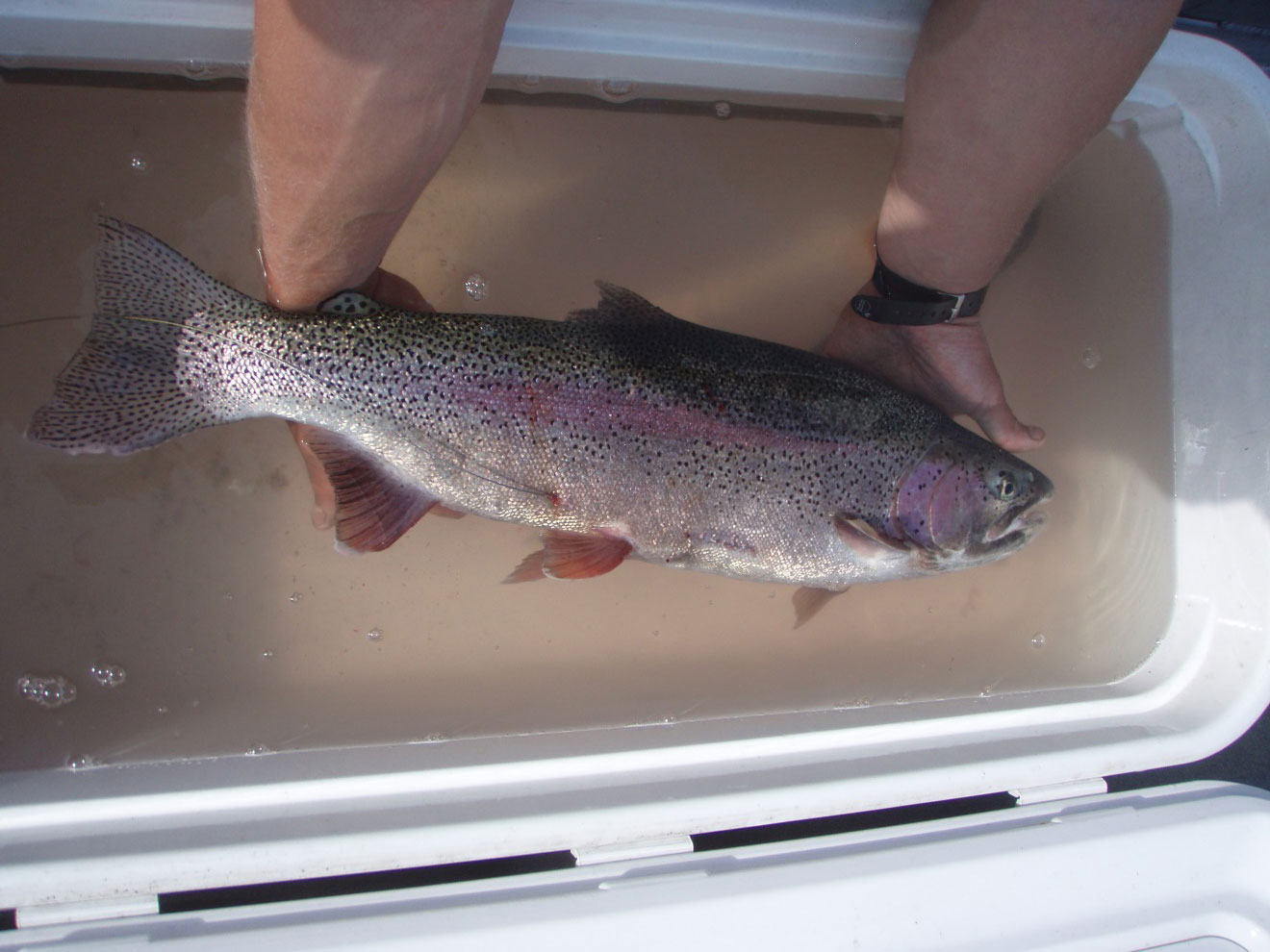 A Kenai River rainbow trout recovers after surgery to implant a radio tag into the abdominal cavity of the fish. Note the radio tag antennae protruding from the incision made in the side of the fish. The antenna transmits a pulse code sent from the radio tag inside the fish to data receivers. The data receivers are located along the Kenai River shoreline and in boats operated by department biologists. Information gathered by the receivers is downloaded to a computer allowing biologists to determine the location of the fish in the river for each day the tag sent a pulse code. 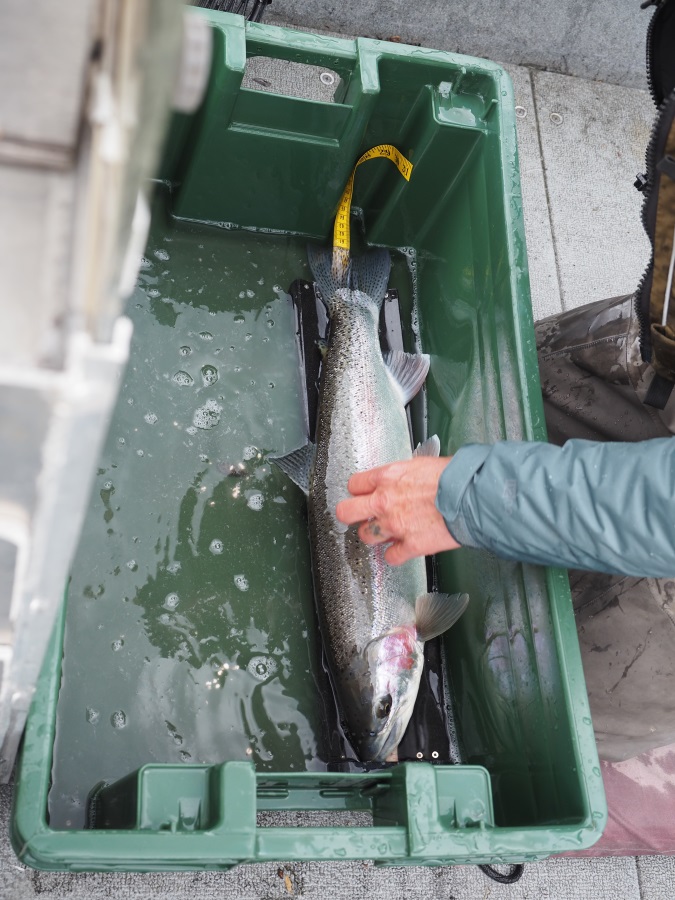 A rainbow trout is measured in a cradle 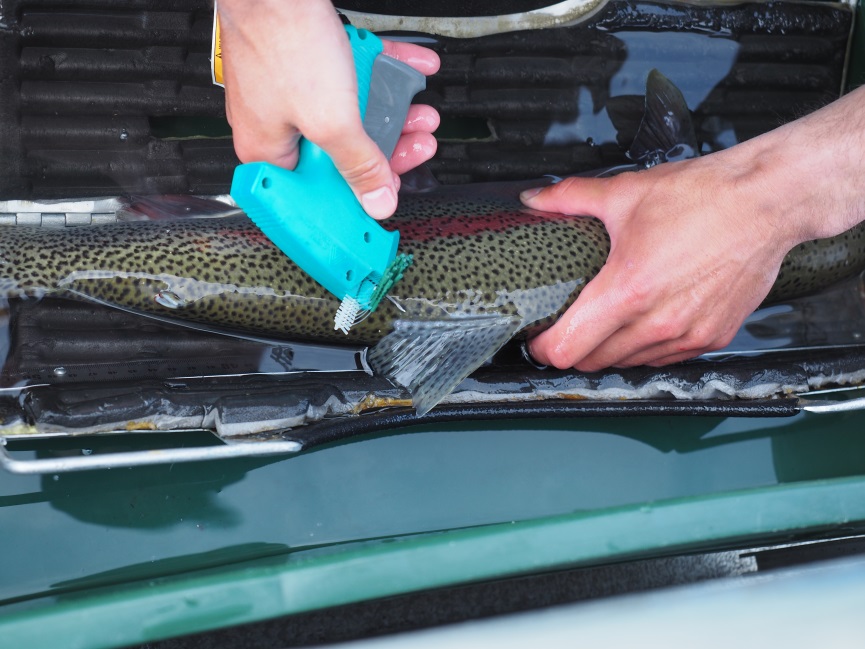 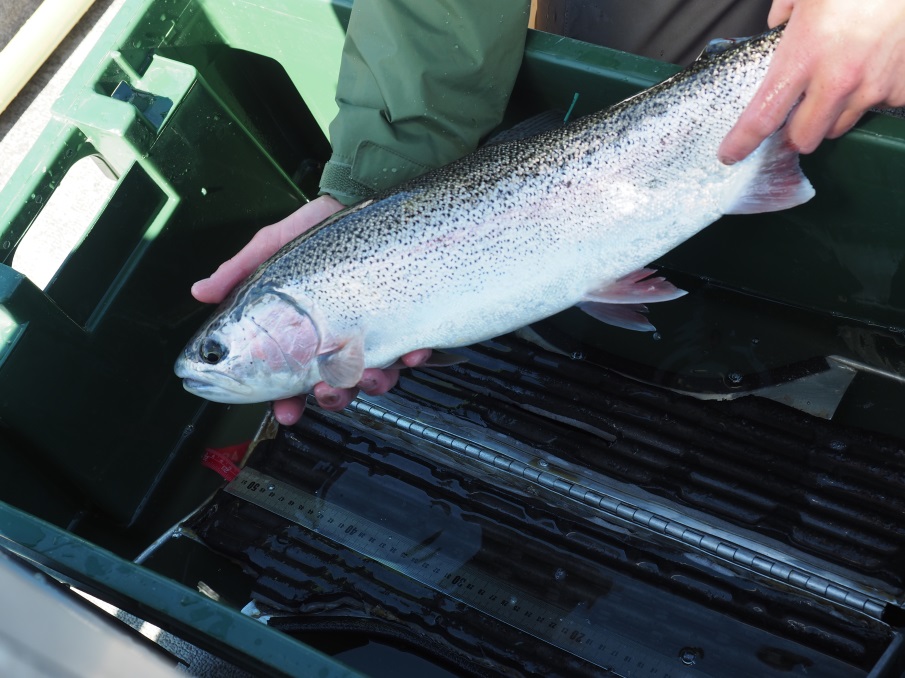 For more information, see the Publications by Eskelin, Pawluk, and Begich.