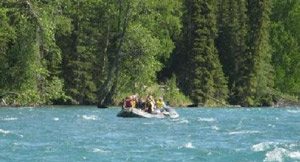 Larger communities located within the NKPMA include Kenai and Soldotna. Smaller communities are Hope, Cooper Landing, Moose Pass and Sterling. This management area is linked to the state's highway system via the Sterling and Seward Highways which provide sport anglers access to many of the area's major fisheries. Remote areas of the NKPMA (west side of Cook Inlet) can be accessed via wheel or float equipped aircraft, boat or walking.