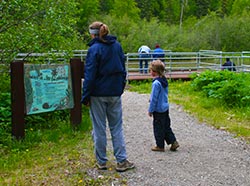 The Susitna Flats State Game Refuge is a bird magnet especially during the spring and fall migrations. By mid-April, several hundred thousand birds may be using the refuge's rich coastal marshes, mud flats, ponds, wetlands and forested areas. Most abundant are waterbirds including ducks, geese, cranes and shorebirds who rely on the refuge for refueling during their journey to northern and western breeding grounds. Their dependence on these feeding areas is the primary reason the Alaska State Legislature created the refuge in 1976. Many species of song birds, raptors and other birds are also found using the refuge. Many of these species remain on the refuge through summer for nesting, although in lower numbers.

The refuge was created to protect fish and wildlife habitat and populations, particularly waterfowl nesting, feeding and migration areas; moose calving areas; spring and fall bear feeding areas; and salmon spawning and rearing habitats. Brown and black bears use the refuge, feeding on early spring vegetation near salt marshes and sedge meadows. Moose calve each spring in brushy thickets near the coast. In the winter, moose from surrounding uplands return to the refuge to find food and relief from deep snow. Beaver, mink, otter, muskrat, coyote, and wolf can also be found.

Several hundred white beluga whales concentrate in an area extending from the Little Susitna River to the Beluga River, between late May and June. The beluga gather in these nearshore waters to calve, breed, and feed on the large runs of eulachon ("hooligan") fish that return to spawn in the Susitna River. The Little Susitna River is also home to five species of Pacific salmon — king (chinook), silver (coho), chum (dog), pink (humpy), and red (sockeye). Rainbow trout and Dolly Varden are also present.

Areas of major waterbird concentrations are only accessible by small boat and birders in private skiffs will occasionally head downriver to the coast from the Little Susitna River Public Use Facility (PUF). Wildlife viewers without a boat can explore forested trails and river banks from the PUF, however. For the more adventuresome, the Little Susitna River offers 45 miles of relatively easy waters for floating or canoeing from the bridge along the George Parks Highway to the PUF. This 1-3 day trip offers abundant opportunities to view wildlife along the river and in adjacent wetlands, meadows, ponds and forests.

Other undeveloped sites within the refuge offering wildlife viewing opportunities include Horseshoe Lake and Middle Lake, While these sites lack developed trails or other facilities, there are abundant opportunities to explore lakes, ponds, and streams; forests, wetlands, open meadows; and other habitats. Access is by foot or canoe and should only be attempted by those adept at backcountry travel and route finding.

Horseshoe and Middle lakes are located five miles south of the Little Su PUF and are accessible from Guernsey Road and Holstein Road. Note that the last 1/4 mile of the Holstein Road access may be very muddy and inaccessible to vehicles in spring or after heavy rains.

The Little Su PUF has accessible parking, a campground, a river-side trail and walkway (used mostly by sport anglers), and vault-style bathrooms (no running water).