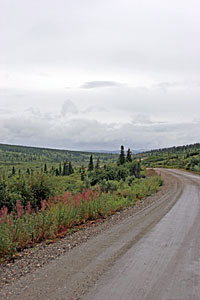 The Balancing Act Between Moose and Bears

Moose numbers along the Fox River and Niukluk River drainages were robust during the 1980s but a series of deep snow winters and too few willows to sustain the population led to a population crash in the early 1990s. Since then the willows have recovered but not the moose whose numbers remain depressed, the result of a healthy grizzly population, which regularly preys on moose calves.

Descending into terrain increasingly dominated by trees and willows, you are more likely to see a moose than a muskox. In late summer grizzlies feed on spawning chum salmon below the Fox River bridge. Salmon carcasses also attract red fox, gulls, and common ravens. Both abandoned and active beaver lodges and dams are found along the Fox River drainage. Dolly Varden, chum and pink salmon, and Arctic grayling can be seen from the bridge.

The narrow and swift-flowing river downstream is hemmed in by dense vegetation. Spotted sandpipers may be seen on a sand bar on the east side of the road. Belted kingfishers burrow into the banks of the river to nest. 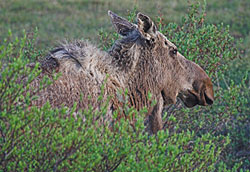 The final section of the Nome-Council Road travels through habitat that is unlike any other along the road system—open parklands dotted with clusters of tall spruce trees. Northern harriers hunt voles, shrews, and lemmings in the meadows. In years of abundance, you may see snowshoe hares licking minerals from the roadbed. Lynx also frequent the area when snowshoe hares are abundant. Moose feed on aquatic plants in the lowland ponds.