The road travels through several different habitats as it climbs toward Skookum Pass, the road summit. Scan the slopes and willow bottoms for possible sightings of grizzly, moose, reindeer, and muskoxen; and check rock outcrops and cliff faces for raptor nests, using the splashes of orange lichen or whitewash as a guide to locate these sites.

The town of Solomon has had several names and locations since the Fish River tribe established a fishing and hunting camp on a sandbar between the Bonanza and Solomon River. They called it Amutach. In 1899, when gold was discovered in the gravels of the Solomon River, a mining boomtown sprang up on the site with over 2,000 residents, a post office, several saloons, a railroad terminal, and a ferry dock. Three larges dredges worked the Solomon River.

A ferocious storm destroyed the town in1913, and residents relocated to the recently abandoned town of Dickson a short ways upstream. As mining waned, Solomon became a predominately Native village and its residents relied on reindeer herding and subsistence, although, the 1918 flu epidemic took a tremendous toll. In 1939, the village was moved to its current location on Jerusalem Hill to avoid annual flooding of the Solomon River.

Heading north, the store and post office are on the right while to the left is the old school house, recently restored. Other buildings in the area are private camps.

Dredges on the Solomon River 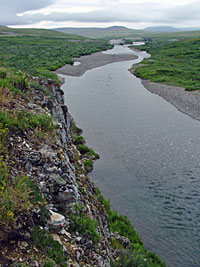 Thirteen dredges that operated on the Solomon River and its tributaries at one time or another altered the condition of the riverbed, sometimes eliminating the pools and riffles necessary for salmon spawning. The undredged section of river along the first four miles of road offers a comparison to the dredged portions upriver. Look for areas where tall felt-leaf willows grow closest to the main branch of the river. They are free of permafrost, and the lush vegetation attracts many species of songbirds.

Notable Wildlife Along the River

Driving northward, piles of gravel tailings start to appear along the river—the remains of earlier mining activity on the Solomon River. Typically, salmon are most affected by mining because the disturbance stirs up fine sediments, which are carried downstream. Settling on the river bed in a process called “concretion,” they coat the fish eggs that have been laid there in silt, choking off their supply of oxygen and nutrients. New placer mining techniques call for settling ponds where the water is held until the sediments drop out and only then returned to the river. Natural systems heal somewhat over time and salmon still return to spawn in the Solomon River, although not in the same numbers they once did.

Mining activity also thawed some of the ground in the river valley, which has encouraged more recent growth of cottonwoods.

Shovel Creek passes under the road through a double culvert before it enters the Solomon River. A year-round spring that feeds the creek near the road keeps the water from freezing in winter. This attracts dippers, beaver, mink, and otter and encourages the growth of cottonwoods.

The spring-fed creek also offers a moderate amount of spawning habitat for pink, chum, and silver salmon in late July and August. Dolly Varden are present but few Arctic grayling.

Lee’s Dredge, the last to work the Solomon River, was operated by the Lee family until the 1960s. The dredge now provides nesting platforms for raptors and ravens. You may see green-winged teal and phalaropes feeding in the dredge pond and songbirds in the surrounding willows.

An old road bed leading to a Solomon River overlook is a good spot to look for salmon, Dolly Varden, and Arctic grayling in late July and August. Chum salmon rarely spawn beyond here as the dredging took out the pools and riffles they seek. Silver salmon spawn a little farther upriver. Say’s phoebe, a small flycatcher with a rusty-orange belly, will launch from its nest on a secluded ledge or crevice on the cliff face to catch insects flying above the river. Northern shrike, harlequin duck, spotted sandpiper, and wandering tattler are seen from this vantage point. In some years, the cliff has an active nest of common raven, rough-legged hawk, or other raptor. These species are sensitive to disturbance. Leave the area if birds flush and show alarm at your presence. 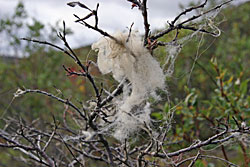 In 1904, a telephone line ran from the railroad terminus at Dickson to the mining camps up Big Hurrah Creek. For one brief summer, parcels could be mailed to any point in the United States and money orders sent worldwide. The Council City & Solomon River Railroad also ran past, offering miners a one-hour trip to the coast.

Grizzlies, moose, muskoxen, and reindeer are frequently sighted between the creek and East Fork Bridge.

Approaching the East Fork of Solomon River, a wide pull-off on the left is an excellent place to park and scan the slopes and river valley for wildlife. Northern wheatear and American pipit frequent the rocky slopes nearby. Cliff swallow often build their nests on the bridge supports, and ravens and raptors occasionally nest in the area. This elevated view of the river makes it easy to find red-breasted merganser, harlequin duck, tattlers, and gulls.

Look for a straight line of vegetation cutting across the side slope on the opposite side of the river. This is the old railroad grade that was part of the Council City & Solomon River Railroad. Plans were to build the track up the East Fork of the Solomon River to mining centers at Ruby and the Casadepaga River then down to the Niukluk River to Council City. Before the project was abandoned in 1907, a train ran past twice a week on its way to Penelope Creek and the Casadepaga River.

The old grade catches and holds rain and snow, and the added moisture has allowed willow and other plants to grow tall, attracting songbirds, small rodents, and furbearers.

Above its confluence with the East Fork, the riverbed of the Solomon River is braided and constantly changing. This seasonal scouring reduces vegetation and prevents establishment of deep pools where aquatic insects can overwinter, which in turn reduces the number of fish. It also prevents the establishment of pools and riffles needed by spawning salmon. The frequent washouts create constant growth of new willows, however, providing a renewable food source for moose. 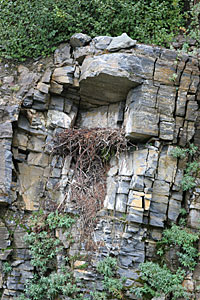 The rocky outcrop across the Solomon River usually hosts an active golden eagle nest. Look for a huge tower of sticks and splashes of whitewash and orange lichen in the vicinity of the nest and surrounding perching sites. Built and added on to in successive years by eagles, the nest is distinctive for its large size, construction, and shape. When not occupied by eagles, the large nest may be used by gyrfalcons. Smaller nests of rough-legged hawks or common ravens may be elsewhere on the cliff. If you don’t see a nest, check for a pile of sticks on the ground below; sometimes the winds or snow load cause nests to collapse. When this happens, eagles often rebuild.

Habitat: Side slopes and dwarf tundra

At the highest point is a small parking area, an excellent place pull off the road safely and explore the alpine tundra.

The parking area offers a particularly good view of a soil feature, common throughout the Seward Peninsula, called solifluction. During the summer thaw, moisture-laden topsoil lying over permanently frozen ground slides extremely slowly downhill in waves called solifluction lobes, similar in appearance to warm icing sliding down the side of a cake. This creeping sheet of soil creates scalloped lobes of taller vegetation along the moist leading edge. Richer and wetter soils along these bands allow more lush vegetation to grow, attracting birds and small mammals not otherwise found in the dry tundra.

Scan for Scenery and Wildlife 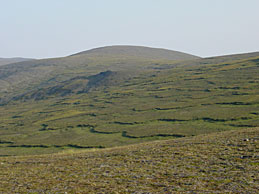 On a clear day this high point offers sweeping views of Norton Sound to the southeast and the westernmost boreal forest to the north and it is easier to spot moose, muskox, and grizzlies in this open country. Caribou, usually present in winter, are sometimes seen in summer too, but you are more likely to see reindeer, which are distinctive by their pinto coloration, short legs and the ear tags attached by herders. Wolf and wolverine use this alpine habitat too but sightings are rare as both species have low population densities and huge home ranges.