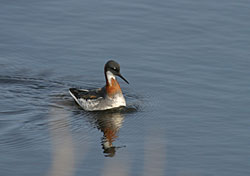 This section of road parallels the coast then moves inland across rolling tundra sliced by bands of thick shrubs and vegetation that grow along the banks of creeks tumbling down steep slopes. The tundra’s small elevated ridges and grassy tussocks provide good nesting and perching places for birds, especially jaegers, gulls, snipe, whimbrel, and plovers. These species are common along this section of road but usually require a keen eye to detect. The open vegetated tundra provides nesting areas for willow ptarmigan, savannah sparrow and Lapland longspur, and nearby shrubby areas add thrush, warbler, and sparrow species to the list of common birds. 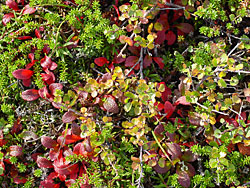 The crossing offers expansive views of a variety of creek-side habitat, each with its own distinctive characteristics. In spring, the upstream portion of the creek is filled with thick layers of glaciered ice that develop as winter constantly freezes water from springs that flow year round into the creek. This late flow of melt water attracts waterbird species long after other areas are ice-free. Driftwood collects in the deeper pools around the crossing, carried in by wind-driven storm tides. Beaver and river otter are likely to be found here and insects hatch in the racks of logs, attracting many birds. West of the bridge, on the elevated gravel pit that is a remnant of past road construction, the open exposed gravel is preferred by semipalmated plover. The surrounding steeper slopes are home to yellow wagtail and bank swallow where the silty cap of soil above the gravel is exposed and used for nesting. The south edge of the gravel pit gives a terrific view of the lower portion of the creek, a relatively wide braided delta where the creek exits to Norton Sound, and the mix of waterfowl, shorebirds, gulls, terns and songbirds is constantly changing as summer advances. This is one location where an unusual species, the stilt sandpiper, has been seen more than once. 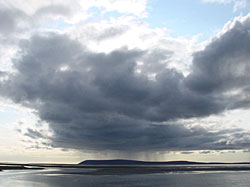 In the dense shrubs, grizzly bears may bed-down during the day waiting to walk the beach in search of a nighttime meal of a dead seal, walrus or whale that has washed ashore. Red fox, gulls, jaegers, and common raven also scavenge the beaches throughout the long summer days. Smaller mammals, such as fox, hare, and porcupine den on the slopes of Cape Nome and resident bird species flock to the abundant alders and willows for feeding and roosting. Moose sometimes seek protection from adverse weather in the dense alders.

Hunters have long found Cape Nome to be an ideal lookout for seals, whales, and walruses, and a prosperous village once existed on its lower slopes. Sixty to 100 people lived in the village of Ayasayuk, a choice spot not only for the abundant marine life but the close proximity to fishing, waterfowl, wild greens, and berry picking. In winter, hunters also traveled about 30 miles up the El Dorado River to look for caribou in the Salmon Lake area, sending smoke signals to herald a successful hunt.

Today the Cape continues to serve as an excellent vantage point for Native seal hunters primarily in the fall as the ice approaches and in early spring as leads open up in the ice.

Cape Nome is a massive granitic outcrop that is much more resistant to weathering than surrounding lands. Local Alaska Native corporations quarry the rock and truck or barge it to large-scale construction projects up and down the coast. Nome’s seawall is built from this granite. Amidst considerable construction or quarry activity, birds continue to nest or roost on the rock faces. The thick vegetated slopes attract dense numbers of warbler and sparrow species during the spring nesting season.