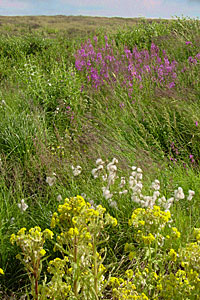 Wildflowers along the road

Several small lakes and ponds sprinkle the landscape on either side of the road. Look for a small hillock just beyond the first lake, formed by uplifting frost action. Called a pingo, this lone mound rises above the surrounding flat tundra meadow and serves as a convenient lookout for tundra hunters such as foxes, wolves, hawks, owls, and jaegers. The soil on the tops of pingos is fertilized by feces of predators and the remains of their prey and generally supports lush and diverse vegetation. Arctic ground squirrels and red foxes sometimes dig dens in these mounds. With climate change, the expanse of permafrost is shrinking and with it, the number of pingos.

You will notice many small, active and abandoned mining operations in the creeks along this stretch of road. Please do not venture onto people’s private property, even if you think a site is abandoned.

The road initially winds through side-slope shrubs of willow and alder. Ptarmigan and red fox are often seen here, as are hares in years of abundance. Vantage points offer opportunities to scan the valley and slopes for bears, moose and muskoxen.

Continuing north you soon enter broad, rolling, moist tundra hills which are home to voles and lemmings whose populations may fluctuate dramatically from year to year. In years when they are abundant look for the slender-bodied northern harrier flying low and the rough-legged hawk circling overhead in search of these small rodents as well as short-eared owls and snowy owls, whose numbers increase with the rodent population. 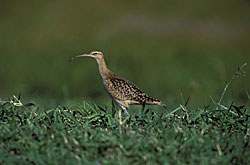 Heading north on the right, the sight of a large, dark hill named Coffee Dome signals to birders that they are in bristle-thighed curlew country. While the curlews nest in similar habitats elsewhere on the Seward Peninsula, this is only spot on the road system that is close to their nesting grounds. Even so, it’s an arduous 45-minute walk through ankle-twisting hummocks up the hillside to the left although you may see one near the road if you are patient and lucky. The birds arrive in early June, sometimes before the road is open all the way, and may be present in this location into July. In mid to late August, you might spot them by the ponds near Nome as they prepare for their fall migration: a non-stop trans-oceanic flight to wintering grounds on southwestern Pacific Ocean islands.

For the best chance of seeing this large, tawny, long-billed shorebird, connect with a local guide or birding group. The Nome Visitor Information Center may also be able to provide directions and suggestions.

The Quartz Creek “bush” airstrip, up a short dirt road, provides a jumping off spot for some of the mining claims beyond the road system, Serpentine Hot Springs and other points, as well as a staging area for Alaska Department of Fish and Game wildlife surveys. The airstrip was built during the road construction years and is still maintained by the state transportation department.