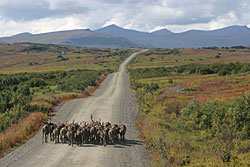 The first 31 miles of the Kougarok Road follow the Nome River valley as it transitions from a coastal zone of broad lowland meadow and open tundra to a narrow valley where the river flows swiftly out of the Kigularik Mountains. Evidence of mining ditches that once provided water for hydraulic mining of the gold-bearing layers of gravel at lower elevations follows the road. Within a short distance of the coast, the road rises in elevation to cross old beach fronts from eons earlier. Thereafter, the road parallels the Nome River, sometimes next to the riffles of water and sometimes on a distant side slope showing the breadth and depth of the valley. Wildlife includes chance encounters of moose, muskox, and grizzly bear, good opportunities to see furbearers such as beaver, fox, or river otter, and varied and abundant birdlife associated with rivers, ponds, shrubs, and meadow habitats. Reindeer herding is a local industry, which had its start in the late 1800s, and corrals and other herders’ facilities may be seen along the road.

Spring provides some of the best opportunities to see domestic reindeer when herders are moving the animals closer to town during the May fawning season to protect the young from predation by wolves and grizzlies. Frequently heard in spring is the winnowing sound of Wilson’s snipe made by air rushing through tail feathers in flight. In summer the drive provides good bird watching for waterfowl, gulls, terns, and tundra species.

The landfill draws scavengers, such as the common raven, which is abundant year round; glaucous, mew and slaty-backed gulls (the latter visits occasionally in summer); and red foxes. 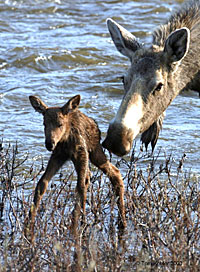 The lower stretch of the Nome River was heavily mined during Nome’s mining heyday from 1900–1930 but fish and wildlife have since returned to the river system. Ponds and sloughs in the Nome River Valley provide important rearing habitat for juvenile silver salmon. Common ravens and gulls feed on the carcasses of the adult salmon that return to spawn in August.

Salmon spawning areas are often found near locations along the river where spring-waters percolate through the gravel riverbed. The constant year-round flow prevents freezing and supplies oxygen to the developing eggs.

Among the dense willows on side slopes and along the tallest willows at the river’s edge you’ll find a mixture of song birds, including gray-cheeked thrush, fox sparrow, yellow warbler, Wilson’s warbler, Arctic warbler, blackpoll warbler. The more open shrublands and tundra are home to orange-crowned warbler, yellow wagtail, savannah sparrow, white-crowned sparrow, tree sparrow, golden-crowned sparrow, Lapland longspur and redpolls. Closer to the river and open water, semipalmated plover, wandering tattler, ruddy turnstone, spotted sandpiper, and gulls are found on gravel bars and feed at the water’s edge. Harlequin ducks and red-breasted mergansers coast along in the faster currents. These species groupings repeat themselves over and over as the same habitats occur again and again along the road corridor. Family groups of willow ptarmigan may be found in the river bottoms in summer. Huge flocks of ptarmigan, numbering in the hundreds, may gather in the fall and winter to feed on willow buds. Northern shrikes perch on the tallest willow branches in search of a hapless vole, shrew, young bird, or large insect. Common ravens sometimes nest on cabin roofs and ledges in the area.

Moose typically give birth in the river valley as the willows leaf out in spring, and they will drive away any pregnant reindeer nearby. Grizzlies are drawn to the calves. Beavers are active as are the less abundant river otters. In all seasons look for tracks and slides made by otters along the riverbank, most obvious in snow. Muskoxen are sometime seen on side slopes.

Spruce trees around cabins were transplanted from the boreal forest near Council. Due to climate warming, however, they are increasingly taking hold naturally in the lower valley.

Heading north, the Dexter Bypass branches off to the left and offers a scenic return to Nome in summer with the possibility of seeing muskoxen. To the right are the seasonal camps and year-round homes that make up the community of Dexter. The local watering hole, the Dexter Roadhouse, is often open late during the summer. Despite persistent rumors, the Dexter Roadhouse was not owned by Wyatt Earp. His enterprise was the Dexter Saloon on Nome’s Front Street.

King Mountain is the next hillside on the left, on the west side of the valley. In most seasons it is easy to see the multiple cuts across its slopes. Most are ditches that brought the water used as hydraulic power to Nome’s gold fields. One, however, is the old rail bed of the Seward Peninsula Railroad, a narrow gauge railroad that transported people and equipment to the Kougarok gold fields. The line ended at the Kuzitrin River, with a spur to Bunker Hill farther upriver. It remained in operation into the mid-1900s.

Reindeer “round-ups” are held at this reindeer corral once or twice a year. Antlers are removed in June and the reindeer are counted, inoculated, castrated, and ear-tagged. Up and down the Nome River Valley you may see groups of reindeer as herders move them toward the corral or north to their summer feeding grounds after the round-up. 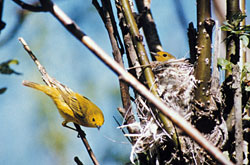 Farther up the slope from the corral are the remains of a railroad trestle. Fast disappearing beneath the willows is an old roundabout – a large circular platform where the last segment of rail could be pivoted 180 degrees to point the engine back toward town. Railroad construction began in Nome the summer of 1900. By 1906 the track stretched 80 miles to the Kuzitrin River. Besides servicing the gold operations in the Kougarok Mining District, the railway opened a swath of country to local residents for sightseeing, hunting, and fishing much as the road does today.

Heading north, the turn off to the right leads to the seasonal camps and year-round homes that make up the community of Banner Creek.

The gravel pit pond just a short ways in may contain local nesting waterfowl, mew gull, Bonaparte’s gull, semipalmated plover, and the edges with the tallest willows contain blackpoll warblers. There is a large beaver lodge on the bank of the pond which has helped to fertilize this once sterile gravel pit. It is now productive enough to support juvenile silver salmon, Dolly Varden, and Arctic grayling

The Nome River is a good place to see salmon. Pink and chum salmon spawn in August, silver salmon are usually here in August and September, and red salmon may also be present as well as Arctic grayling and Dolly Varden. Look for Arctic terns plunging for fish, harlequin duck and red-breasted merganser riding the swift water, spotted sandpiper or wandering tattler walking the bank at waterline, or northern shrike in the willowed edges of the river.