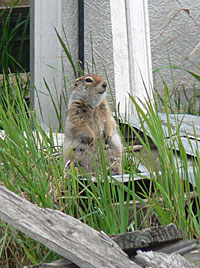 The elevation gradually rises as you continue up the Nome River Valley. The vegetation becomes less lush, the hillsides steepen, and rocky outcrops and inland cliffs become more prominent. Low passes cut through the mountains you are driving through and serve as natural migration corridors for animals moving about their home ranges.

Growing low on some side slopes are small stands of cottonwoods (balsam poplar trees), an indication of thawed ground, which is often associated with ground water seepage or springs. Look for holes drilled into the trees by woodpeckers for their nests. You may find bluethroats flitting through the willows in the small side drainages and common ravens nesting in the branches of cottonwoods.

Be especially vigilant for raptors and their nests over the next 15 miles. Examine high rocky outcrops for splashes of white excrement left by the birds’ and rocks colored orange by lichen growing in the nutrient rich areas beneath raptor nests and perch sites. Golden eagles build large stick nests, which may be occupied later by falcons that do not build nests. Rough-legged hawks sometimes soar high over the valley searching for ground squirrels and small rodents. Gyrfalcons frequently cruise with strong wing beats low over the willow thickets attempting to surprise or flush ptarmigan or small birds. Arctic ground squirrels often den in the loose gravel of the road shoulder. 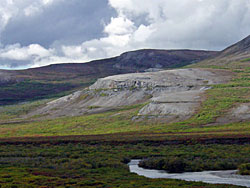 From this high point in the road you get an excellent view across the valley. On the far side of the valley the ditch lines from earlier mining activities are apparent, especially where they cross the exposed rock face of Cape Horn. These three ditch lines originate near Hudson Creek about 12 miles upstream and were built to carry water to mining operations in the Nome area. The wide, deep ditches offer cover and easier movement for wildlife—look for moose and grizzly bears. The famous dog musher, Leonhard Seppala, worked for the Pioneer Mining Company and kept a cabin and summer kennels nearby. A commemorative plaque in his honor decorates the face of Cape Horn. Gyrfalcons, rough-legged hawks, and ravens alternately nest on or use the Cape Horn rock formation.

Examine the rocky outcrops on your right heading north for raptor nests. Bluethroats may flit through the willows.

Heading north, Dorothy Creek flows out of mountains to your left and runs past the red cabin on the far bank of the Nome River. Remains of the old U.S. Road House may also be found in the area. You can hike to a scenic waterfall about one mile up the creek. While there is no trail, you can hike in open tundra above the creek on the south side, then clamber down a steep incline to the creek just above or below the waterfall.

American dippers may be seen flying through the waterfall to land on the rock face beyond where it has built a dome-shaped nest of moss. Silver salmon use the man-made series of ponds on the east side of the main road as rearing habitat for juveniles. The pools were constructed during road renovations in 2004.